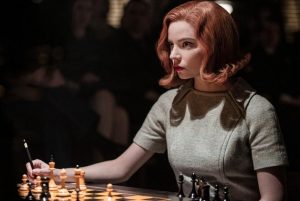 The Queen’s Gambit, a recently released drama miniseries on Netflix, has just cracked a record-setting 62 million households watching it in its first 28 days of release since October 23.

The Queen’s Gambit is a coming-of-age period drama miniseries based on Walter Tevis’s 1983 novel of the same name, created for Netflix by Scott Frank and Allan Scott and written and directed by the former. Set in the 1960s, the series stars Anya Taylor-Joy as an orphaned chess prodigy on her rise to becoming the world’s greatest chess player while navigating issues of emotional attachment and drug addiction stemming from her childhood.

The series was released on October 23, 2020, attaining high viewership and going on to become Netflix’s most-watched scripted miniseries. The series received widespread critical acclaim, particularly for Taylor-Joy’s performance as well as the visuals and production values. The series also attained a positive response from the chess community and is credited with spurring a resurgence of public interest in the game.

It is a story that follows the life of an orphan chess prodigy, Beth Harmon, during her quest to become the world’s greatest chess player while struggling with emotional problems and drug and alcohol dependency. The Queen’s Gambit is a chess opening. The story begins in the mid-1950s and proceeds into the 1960s.

The story begins in Lexington, Kentucky, where a nine-year-old Beth, having lost her mother in a car crash, is taken to an orphanage where she is taught chess by the building’s custodian, Mr. Shaibel. As was common during the 1950s, the orphanage dispenses daily tranquilizer pills to the girls, which turns into an addiction for Beth.

A few years later, Beth is adopted by Alma Wheatley and her husband from Lexington. As she adjusts to her new home, Beth enters a chess tournament and wins despite having no prior experience in competitive chess. She develops friendships with several people, including former Kentucky state champion Harry Beltik; gifted but arrogant chess prodigy Benny Watts; and journalist, photographer, and fellow player D.L. Townes. As Beth continues to win games and reaps the financial benefits of her success, she becomes more dependent on drugs and alcohol.