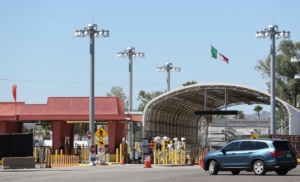 Mexican authorities in Sonora closed the U.S-Sonora border to nonessential travel this holiday weekend when Arizonans would normally travel to Mexican beach towns like Rocky Point and San Carlos to celebrate the Fourth of July.

The governor did not specify an end-date for the border closure.

In order to strengthen the prevention strategies in the face of the health emergency due to COVID-19, Sonora Governor Claudia Pavlovich Arellano announced that operation began this weekend, with filters at the border, to stop the crossing of U.S. residents towards Sonora, and people with non-essential activities.

The governor indicated that due to the increase of COVID-19 cases in Arizona, she asked Foreign Minister Marcelo Ebrard, Secretary of Foreign Relations of Mexico, to make effective the border closure between Sonora and the United States.

“There were filters placed at the borders, both in San Luis Río Colorado, as in Nogales, as in Agua Prieta so they cannot enter unless they come to something essential, not anything else,” the governor said. “We are all going to be on alert at this time, to prevent them from coming and putting a greater burden with COVID-19,” she stated.

In addition, Governor Pavlovich asked Foreign Minister Marcelo Ebrard for support so that in the different embassies and consulates in Arizona, people with non-essential activities are informed of this border closure, and thus prevent citizens from moving to border crossings, since access will only be allowed to people with essential activities such as work, commercial crossings, and activities that have to do with health.

The governor pointed out that another of the actions to be implemented will be the closure of beaches.

Governor Pavlovich appointed in each of the filters that were placed on the borders with the United States, elements from the health sector, the National Institute of Migration, and other levels of government.