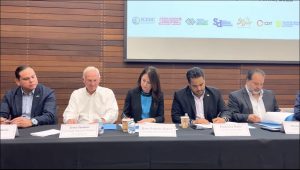 “Having a strong and unified voice is critical when advocating for our binational region. Today, we join together to promote the binational business community, boost economic development, and attract foreign direct investment,” said Jerry Sanders, San Diego Regional Chamber of Commerce President and CEO.  “It is moments like these, and our commitment to binational collaboration, that make the Cali-Baja region thrive.”

The MOU, signed in Tijuana, aims to promote the binational region as the main destination of foreign investment.  In addition, all stakeholders involved pledged to support shared communication efforts and collective events, resolve investment restrictions, and advance public policies that boost the region’s global competitiveness.

“This is a great moment and opportunity for our region to align efforts as one,” said Carlos Jaramillo, Tijuana Economic Development Corporation Board Chair. “Today, we send a message that we as organizations from both sides of the border are together to promote and strengthen our economy and our region.”

The Binational Region comprises Baja California, San Diego County, and Imperial County in California. It has more than 90 universities and colleges and more than 3.8 million jobs.

The mega-region seeks cooperation between these two borders and their neighboring states. The business opportunities in Mexico are enriched by the elements of a region like the Binational Region.

Outsourcing to Tijuana is one option given to foreign investors due to the city is known as a place with high-tech talent. With universities like the Autonomous University of Baja California and Polytechnic University, Tijuana produces more technology talent than any other Mexican city.