Referendum Will Measure the Performance of Mexico President 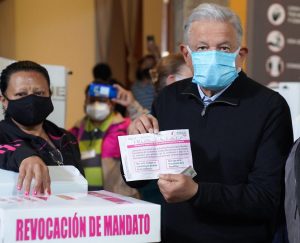 Just like the iconic song by The Clash titled “Should I Stay or Should I Go?” Mexico is celebrating a special recall election to see if the President of Mexico should stay in power or not. While Mexico’s constitution does not force the President to go through a midterm referendum, Andres Manuel Lopez Obrador had other plans and insisted on this process taking place and asking the people if they approve of his work.

In an unsurprising result, the early counts show that 90 percent of voters decided to keep him but now members of the Morena Party are blaming the electoral institute for the dismal participation setting the stage for them to try to dismantle the institution or reform it.

The President is set to continue his populist platform at all costs. Opponents of this referendum say that is just a waste of money that will set a bad precedent for Mexico’s democracy.

The 2022 Mexican presidential recall election, officially called the Recall Process of the President of the Republic elected for the constitutional period 2018–2024 by the electoral organization Instituto Nacional Electoral (INE), took place on 10 April 2022 to decide if the incumbent President Andrés Manuel López Obrador should stay in office and serve his full six-year term.

To be valid, the recall must be approved by an absolute majority of valid votes, and the turnout must be at least 40%.

This is the first national recall election in Mexico. It was proposed by López Obrador himself during his candidacy in the 2018 election and requested by opponents and supporters of his government. It is organized by the INE, triggered by 2.7 million signatures from 17 Mexican states that represented 3% of the electoral roll, following rules set by the Constitution of Mexico and the Federal Law of Revocation of Mandate.

The INE, which started preparations in August 2021, stated that there was a lack of resources for the consultation organization, causing it to challenge the budget approved by Congress and ask the Supreme Court of Justice of the Nation for its stance. In contrast, the president and other government figures assured that the organization did have the appropriate money.

After suspending preparations, the decision for suspension was revoked by the Supreme Court’s recess commission and the Federal Electoral Tribunal, which ordered the INE to perform the consultation. With that, on February 4, the call for consultation was approved, causing the installation of 57,377 polling stations and 1.5674 billion Mexican pesos available for the INE, less than half of the initially requested money.

From his presidential campaign, López Obrador promised to hold a recall election two years into his eventual government. Later, in government, on 19 March 2019, he signed a letter which stated ″In 2021, a consultation will be held to ask the citizens if they want me to continue governing or resign″ and rejected that ″the proposition of holding the recall conceals the intention to reelect myself in 2024, ″ an accusation made by some opposition figures of the government. In October of the same year, the Mexican Senate approved the recall election in general, with 98 votes in favor, 22 against, and one abstention.