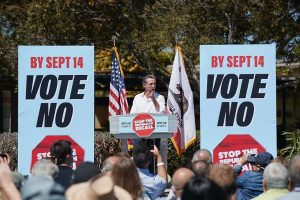 California Governor Gavin Newsom will stay in office as a majority of Californians voted “NO” against the recall led by state Republicans who were against the Governor’s restrictions during the COVID-19 pandemic.

The Imperial County Registrar of Voters issued an “Unofficial Election Results” update on the Registrar’s website at https://elections.imperialcounty.org/ for the September 14 Gubernatorial Recall Election.

Early results show that Imperial County voters said no to the recall. Republican challenger Larry Elder received the largest amount of votes in the Imperial Valley with 3,072 votes at the beginning of the vote count. No other candidate was close to reaching the 1,000 vote mark locally.

Mr. Newsom’s leading opponent, talk show host Larry Elder, received the most votes on the ballot’s second question of who should become governor, if the recall were successful, with 44.7%.

Provisional ballots are counted after all voter rosters are reviewed and the voter’s history is applied to the voter’s record. The procedure for tallying provisional ballots is just as long as processing vote-by-mail ballots, but require some additional steps to take. This process includes: