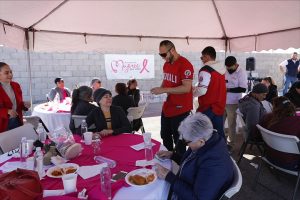 Fundación Mujeres Que Viven, in coordination with Club Águilas de Mexicali, jointly organized another edition of the traditional Christmas breakfast at the facilities of the “Madre de Guadalupe” Cancer Center.

The event is organized every year to share a moment of joy, faith, and hope with patients who constantly fight against the terrible evil of cancer.

It was Mrs. María de Jesús Villalobos de Murillo, President of Mujeres Que Viven Foundation who welcomed those attending the event together with the delegation formed by the C.P.  Mónica Goldbaum Castro, General Director of the Águilas de Mexicali Club, as well as Maestra Patricia Pacho Ruiz, Director of the Mujeres Que Viven Foundation, where they focused their message on providing encouragement, encouragement, and courage in the face of the adversity caused by said disease.

There was also the presence of the ladies of the volunteer service “Las Rositas” who enthusiastically join each of the events organized by Fundación Mujeres Que Viven, being a fundamental piece for the achievement of the objectives within the tireless work of support towards patients with breast cancer during their treatment.

On behalf of the legion of Los Caballeros Águilas de Mexicali, the pitcher Daniel Flores and Carlos Arellano were present, who were pleased to deliver gifts to each of the patients, in addition to expressing their support for their constant battle with the firm objective of getting ahead.