Breaking News
Home / BINATIONAL / MIGRANTS ARE WORTH BECAUSE THEY ARE MEXICAN, NOT BECAUSE OF THEIR DOLLARS: GINA CRUZ 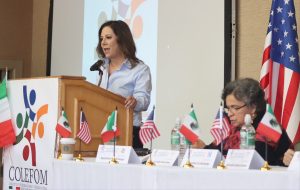 The Senator for Baja California, Gina Andrea Cruz Blackledge, expressed her support for the Mexican community in the United States, who seek to influence the decisions made in their country of origin through the election of their federal and local authorities. The money they send to the country is greatly appreciated, but their rights are not respected.

This was stated during the meeting of the Collective of Mexican Migrant Federations and Organizations (Colefom), coordinated by Efraín Jiménez, in which the possibility of presenting an action of unconstitutionality before the electoral reform with which the representation of the migrant community in the Mexican Congress was reduced.

“We are going to come together to bring and promote support and simply recognize the right that you have as Mexicans. You are not worth it only because of your dollars, you are worth it because you are Mexican.”

“Our compatriots are very grateful for the amount of money they send, but I think they should be recognized as having the right to decide who is standing in front of our nation”.

Gina Cruz explained that the reforms approved by Congress, known as Plan “B”, are a serious setback in the rights of the Mexican community residing abroad.

There was talk of the creation of a sixth multi-member constituency, but of the 44 districts that were contemplated for people residing abroad, the indigenous community, Afro-Mexicans, sexual diversity, and young people, only 25 of 300 were approved.

“This represents a setback  to the representation of groups whose voice should have relevance and strength in the Congress of the Union and decision-making spaces, instead of expanding freedoms and consolidating the right to vote for those who reside abroad, the possibility of voting for councils by proportional representation, for local councils, and legal authorities is omitted.”

She mentioned that the consulates are also suffering from budget cuts that have been made to them in the last 4 years, as well as the reduction in personnel, the lack of supplies, and empathy that occurs in the Mexican foreign ministry.

Gina Cruz explained that there are many complaints about how the immigration authorities of the United States treat Mexicans, but it is also necessary to see how the Mexican authorities treat compatriots.

She commented that she has signed specific commitments from the meeting, but she also takes the others that have been generated in the rest of the workgroups, but each of the initiatives generated by this group must also be followed up.

“We have infinite gratitude towards you, gratitude for what you live, for what you do, for what you represent as Mexican men and women, but we also have a shared commitment, which we assume today with much love, much affection, but above all, with great admiration and pride, for the Mexicans in the United States”.

Today, Mexican nationality is recognized for children of a Mexican father or mother born abroad, but in addition, Mexicans are acquiring more rights.

If the electoral reform is carried out, more than 11 million Mexicans will be joining the electoral roll. U.S. residents represent a third of the vote received by the current President of Mexico, in the constitutional election of 2018, so from there they should be given recognition. 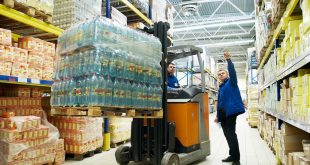 -Editorial Prices for wholesale goods and services fell sharply in December, providing another sign that …