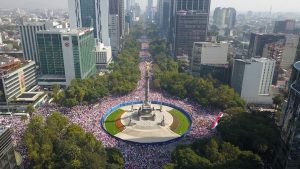 Tens of thousands took to the streets in Mexico on Nov. 13 to protest President Andres Manuel Lopez Obrador’s plan to overhaul the country’s electoral commission in what they fear would centralize power in the hands of the government.

Every state in Mexico held a rally to protect the electoral institute, including Baja California. Around 9 a.m. people began to arrive at the event in Mexicali where an estimated 8,000 and 10,000 people attended.

“It was surprising to see people in wheelchairs and with canes, people of all ages joining in cheering “WE ARE ALL INE”, “THE INE IS NOT TO BE TOUCHED,” it was a great exercise of democracy what war experienced this morning,” said Maria Teresa Babún Villareal. “We never ceased having an influx of people. The anger of the people for the fact that the president of Mexico is proposing to take away what belongs to us Mexicans, which is the right to freedom.”

Early this year, President Lopez Obrador proposed a reform that would require INE officials to be elected by vote. He contends that the proposal would “allow citizens to select honest people to run elections.” The idea is opposed by academics and nongovernmental organizations, viewing it as a way to politicize the body with parties steering their supporters to vote for particular candidates for the board.

He has said that the reform would let citizens elect electoral authorities and reduce the influence of economic interests in politics. It would also cut financing for political parties and limit advertising time.

Obrador has criticized electoral authorities for years, including accusing them of vote fraud in 2006 and 2012 when he ran and lost bids for the presidency, arguing that the system is stacked against him.

“We are already close to 400 people in this movement and the only thing we want is for Mexico to be on the right track,” he said.  Interested people can contact her on her WhatsApp at 686-123-5362.