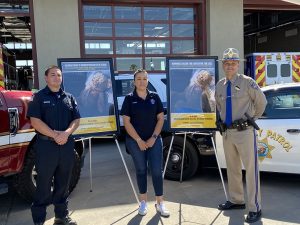 Triple-digit summer weather has arrived in the Imperial Valley and with it, the risk of death or illness if the person does not take precautions. More specifically, child death can be prevented.

The California Highway Patrol and El Centro Fire Department join efforts each year with the Imperial County Health Department to reduce these deaths by reminding parents and caregivers about the dangers of heatstroke and leaving children in hot cars.

Leaving a child in a car that puts them in danger can be subject to prosecution under the penal code.

“It is our responsibility as a community to be on the lookout and if see a child locked in a car during extreme heat, you need to report it immediately,” Lt. Ernesto Ruelas from the California Highway Patrol said.

The signs of heat exhaustion include headache, dizziness and confusion, loss of appetite and feeling sick, excessive sweating and pale, clammy skin, cramps in the arms, legs, and stomach, fast breathing or pulse,

“Parents that have lost a child thought it wouldn’t happen to them. Situations like these can be prevented, said Robert Gonzalez, Public Information Officer for the El Centro Fire Department said that

According to the National Highway Traffic Safety Administration, Children dying from heatstroke in cars, either because they were left or became trapped, has increased in recent years. In 2018 and 2019, a record 53 children died of vehicular heatstroke each year. Just this year, three children lost their lives.

The majority of hot car deaths — 53% — happen because someone forgets a child in a car. About 46% of the time when a child was forgotten, the caregiver meant to drop the child off at a daycare or preschool. Thursdays and Fridays — the end of the workweek — have had the highest deaths. More than half of the deaths (54%) are children under 2 years old.

Vehicular heatstroke deaths don’t just happen when a child is forgotten. The second leading cause —  26% — of such deaths are children getting into unattended vehicles. Get in the habit of always locking your car doors and trunk, year-round. The temperature inside a car can reach over 115 degrees when the outside temperature is just 70 degrees.

Nine years ago, NHTSA launched a public education campaign, “Where’s Baby? Look Before you Lock,” in the hope that the simple tips from this campaign will save lives and help families avoid unnecessary heartache.  Posters have been shared with local pediatricians, healthcare providers, and childcare sites to promote the campaign.  Parents can download the Kars4Kids Safety App to use as a tool to check for their baby before walking away from their vehicle.