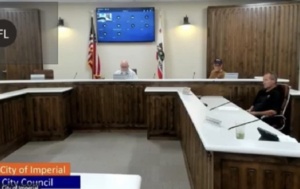 The Imperial City Council voted 5-0 to allow the business to open at a special meeting Friday, August 21.

The City of Imperial became the first municipality to allow their businesses to reopen despite having the Imperial County in the State’s watchlist and not yet moved to Stage 2 Lower Risk. The council agreed that the state’s timeline has affected small businesses.

City of Imperial Mayor Darrell Pechtl said during his remarks that this was not an act of defiance to the county and the state on the health orders but they are against the timeline they have imposed to reopen.

“Our businesses can’t wait until Stage 4 to reopen because they can’t wait four more months. They need our support now,” Mayor Pechtl said during his remarks. The mayor said that people should keep the same and take every safety measure to avoid being infected but he said local business people need to go back to work.

The city is at risk to lose $264,000 from the Cares Act but Pechtl said local people and their livelihoods are more worth than the money.

“How come the County is not speaking out for our businesses? I’m waiting for that,” the Mayor said.

The council approved a resolution stating that restaurants would be permitted to temporarily establish outdoor eating areas in those zoning designations that already permit the establishment of restaurants.

There will be increased flexibility to implement outdoor dining in “cordoned off” parking and sidewalk areas. Enacting these provisions would provide restaurant operators with additional space so they can recover the lost revenue they had since the start of the pandemic.

The City of Imperial strongly recommends that all businesses adhere to recommendations from the California Department of Public Health in order to provide a safe environment.

Mayor Pro Tem Karin Eugenio said she was not satisfied with how county and the state have addressed the crisis business owners are going through.

“The state has mandated regulations for all but we are all very diverse. We are rural and a desert. Stores are closing and we have an obligation to support them,” Eugenio said.

Councilman Geoff Dale said he was sick of seeing businesses closing. He said the state does not care about local business people.

“We have to learn how to live with COVID-19 and I know each business will take care of their customers,” Dale said.