Coparmex points out illegality and unconstitutionality

Part 2. Strengthening of the culture of lawfulness in the educational process 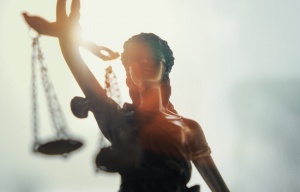 I took part in the AILA Annual Conference training for new chapter chairs, and as an ‘icebreaker,’ was asked to complete phrases handed out on little slips of paper. Mine read, “The best way to save….” I immediately responded, “One way to save a life is to be an immigration lawyer.”

I’m not exaggerating. Immigration lawyers save lives. Let me share with you a pro bono case I took on as an example of the kind of difference lawyers can make and which the Immigration Justice Campaign aims to make possible.

In February, I was standing in front of San Francisco’s City Hall listening to supporters of proposed funding for the Office of the Public Defender to begin immigration defense work. There were speeches and cheering and I could not hear my phone, but as I took it out to take a picture of the scene, a colleague, Alison, called. Her question was, “Will you take on a pro bono case for a detained transgender woman who has an individual hearing in less than two months? I will help you.”

I was standing at City Hall that day to communicate to city leaders what AILA members know firsthand, that the greatest unmet need in immigration court is representation for low-income, detained immigrants. I was there to support funding for the Public Defender to help fill this gap, and to support San Francisco’s desire to provide access to counsel and due process for all. How could I say no when I got the telephone call from Alison? I couldn’t. I took the case.

Kimberly* had been detained and trying to find legal representation for seven months. She showed me 11 letters from six non-profit organizations that were unable to take her case. Alison was at the seventh – Transgender Law Center (TLC) – and had received the referral from a partner organization at full capacity.  TLC’s Trans Immigrant Defense Effort (TIDE) recruits and trains pro bono attorneys to meet the urgent need for legal services for transgender and gender nonconforming (TGNC) immigrants.

Alison is like a matchmaker setting up vulnerable detainees with lawyers willing to take on pro bono work.  She is generous with her guidance, and in this case, we worked side by side for the duration of the case. We worked together even after she took a new position at Centro Legal de la Raza, another organization whose staff attorneys regularly mentor and co-counsel with pro bono counsel.

Kimberly came to the United States at the age of 12, fleeing conscription as a child soldier in a civil war. In the process, Kimberly also escaped from the child abuse and harassment she endured as a biological boy whose mannerisms were feminine. Within a short period, her relatives in the U.S. rejected her and Kimberly was on her own, a gay transgender teen runaway. Those who took her in next taught her to steal for a living, and it was years before she broke away from her only community to change her life for the better.

Kimberly left the city and began to work as a farm laborer, but she could not escape the emotional harm of being abused as a child, the loneliness of coming to this country as a child without her parents no matter how imperfect, nor the depression she suffered when her relatives treated her as if her natural being were a disease. She battled alcoholism, and the pain of discovering a cheating beau was the catalyst for one more mistake, a DUI. That is how Kimberly was placed in removal proceedings.

Kimberly’s life in the U.S. included years’ worth of criminal convictions which were like waves crashing insistently, loudly on the surface of her case. They were obvious.  Under the surface, however, were the circumstances of her survival as a teenager forced to take care of herself and her experience of child abuse and persecution for being gay and transgender. When I first met Kimberly, it was difficult to understand her story. I would leave a session struggling with how to bring out her narrative, and Alison would encourage me to keep questioning deeply. What was written in Kimberly’s pro se asylum application and the way she explained her story to me at first were limited and superficial. What stood out in the court’s file were the criminal records and not the deeper story. If deported, Kimberly faced further persecution and torment, and possible death.

Having lawyers on her side gave Kimberly a chance to present her full case. We cannot know how the case would have gone without representation.  Kimberly would have testified by video. She would have left out the parts of her childhood that she did not even think were important when we met and that she only shared with me after hours of discussion.  She would have been wholly unprepared to stand up to aggressive cross examination about her criminal record. Would the judge have taken the time and been able to drag up to the surface the deep parts of her experience that ultimately allowed for a grant of withholding of removal? We cannot know, but we can guess.

We’re all already busy, with more work than we know what to do with and personal obligations as well. But, there are resources and tools that the IJC offers to help. And the reality is that the more of us who stand up and take on the representation of low income, detained immigrants, the more likely it will be that we save a life.

-Editorial Ruth Bader Ginsburg, the Supreme Court justice who was as pioneering as she was …