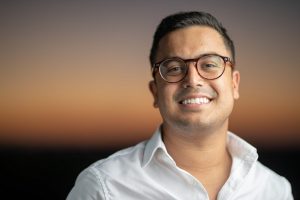 The County of Imperial is proud to announce the appointment of Gil Rebollar as Imperial County Public Information Officer (PIO) to replace former PIO, Linsey Dale, who now serves as the Imperial County Registrar of Voters.  Mr. Rebollar’s appointment as PIO will begin effective immediately.

Chairman of the Board and District 3 Supervisor, Michael W. Kelley, stated, “Mr. Rebollar has proven his dedication and commitment to our county throughout his career. The Board and I believe that his skill set and knowledge of traditional and new media, as well as a deep understanding of the core mission and values of our organization, will be to the benefit of the County, our departments, and the people we represent.”

An Imperial Valley native, Mr. Rebollar has spent his entire professional career with the County of Imperial, starting as a volunteer for the Imperial County Public Administrator’s Office in 2015. Shortly after, Rebollar was hired by the Imperial County Area Agency on Aging (AAA) as a Community Service Worker in 2016 and was later promoted to Information & Assistance Coordinator in 2017. While at the AAA, Mr. Rebollar was responsible for coordinating the annual Senior Appreciation Day event that hosted over 40 agencies and hundreds of seniors and caregivers and coordinating public outreach efforts for the department.  In 2018, Mr. Rebollar joined the Imperial County Air Pollution Control District as an Administrative Analyst where he was assigned to manage various grants and all communications efforts on behalf of the department. Since March 2020, Mr. Rebollar has worked closely with the County Executive Office, Public Health Department, and Office of Emergency Services through the Joint Information Center and Crisis Communications Unit assisting with the coordination and dissemination of official, timely, accurate, and consistent information to the public regarding COVID-19 and the County’s response efforts.

“I am excited that Gil will be joining my staff and filling the position of PIO,” said Mr. Tony Rouhotas, Jr., County Executive Officer.  “Gil has done a fabulous job assisting our communications personnel this last year throughout the pandemic in an ancillary role and showed that he definitely has the capability and work ethic. I am proud to add him to the team and know he will fit into the role well.”

As the PIO, Mr. Rebollar will be responsible for promoting awareness of the County of Imperial’s mission, departments, programs, policies, and initiatives to Imperial County residents, media, other governmental agencies, and the business community.

Upon the announcement of his appointment, Mr. Rebollar stated, “I am excited to be in this new role and feel that everything in my career has to lead me to this point.  Throughout my career, and especially over the past 12 months, I have seen County employees continuing to work extremely hard despite the challenges we’ve all experienced. I look forward to highlighting the work of our employees and the departments they represent to build trust and open communication between the County of Imperial and the people we proudly serve.”

Mr. Rebollar, a Brawley native, obtained his bachelor’s degree in Human Services through the University of Phoenix and master’s degree in Public Administration, with an option in Public Sector Management and Leadership, from California State University, Northridge.