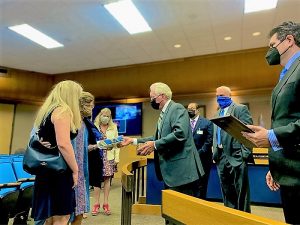 Kelley’s parents and family accepted the award on his behalf.

“The Kelley Family is honored to accept the medal and recognition on behalf of our departed son, father, brother,” shared District 4 Supervisor and brother of Kelley, Ryan Kelley, “Kevin would enjoy the ceremony and take the opportunity to acknowledge all the people in his life that made an impact on him.  Our family thanks the Board of Supervisors and the County of Imperial for this honor and we know Kevin is enjoying it as well.”

“Kevin Kelley’s death is an enormous loss to our community,” added Chairman Mike Kelley, “His contributions and insight helped shape the IID and the Imperial Valley, and his legacy will live on for years.”

The County of Imperial Medal of Merit is an award created by the Board of Supervisors to commemorate outstanding commitment and dedication to community and civic service, goodwill, and/or acts of heroism by Imperial County residents.