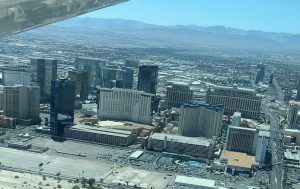 The recent announcement that flights from the Imperial County Airport to Las Vegas, Nevada were going to be available to the public was received with excitement and fanfare, however, the celebration has been apparently cut short as unforeseen circumstances will stop this for the time being.

The Imperial County Board of Supervisors met on July 26 and approved a request from Southern Airways to change the second hub destination from Las Vegas to Phoenix, Arizona due to operational issues.

On February 18, 2022, the U.S. Department of Transportation selected Southern Airways Express LLC to provide Essential Air Services at Imperial County Airport for four years from May 1, 2022, through April 30, 2026. Within this order, the Los Angeles International Airport and Las Vegas Harry Reid International Airport we’re designated as the primary and secondary destinations.

Flights from Imperial to Las Vegas began in May and recently Southern has shared with the Imperial Airport management that they are experiencing unforeseen operational issues at the second hub and expressed an interest to change their second hub from Las Vegas to Phoenix Sky Harbor Airport.

Southern send a letter to the County explaining the challenges they have faced the last few months and the opportunities they wish to pursue with a different hub. In the letter, Southern also shares their plans of when they want to implement the switch and its willingness to work with the County to continue providing limited, targeted flights to Las Vegas without a subsidy.

Mark Cestari, Chief Commercial Officer of Southern Airways, said in the letter that their operational issues are due to a combination of elevation and heat during departure leading to longer, more turbulent return flights that are then affecting the flights to Los Angeles. The heat and elevation issues, both in Las Vegas and especially between Imperial and Las Vegas have and will continue to impact their ability to have a reliable service and will affect the Imperial-Los Angels route by causing many flight cancellations.

“These extreme weather conditions are beyond our control,” Cestari wrote in the letter. “Southern has worked hard to establish excellent reliability performance and good reputation with local flyers. We want to be able to maintain that and not negatively impact our enplanement goals.”

That’s why the airline proposed Phoenix as a destination.

Cestari said that Phoenix offers a superior combination of both a huge American Airlines hub, with domestic and international connections and addition, Southwest, Spirit, Allegiant, and Sun Country, domestically, together with Westlet and Volaris, internationally, offer hundreds of low-cost Imperial flyers looking for low-cost flights.

“We are also adding a scale to our Phoenix hub, which provides more planes, more pilots, superior reliability, and support for our Imperial customers,” Cestari said.

Southern believes that this move will enable an increase in enplanements of at least 10 to 15 percent due to the superior Los Angeles and Phoenix connections. The plan is to make the switch in mid-September with plans to fly to LAX and Phoenix twice a day.