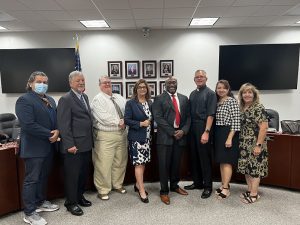 The IVC Board of Trustees announced Dr. Lennor Johnson, as their selection for the superintendent/president position after the closed session of a special board meeting on Monday, April 25.

Pending successful completion of negotiations of an employment agreement, Lennor Johnson will become the tenth superintendent/president of Imperial Valley College at its regularly scheduled board meeting on May 18.

He will be replacing Martha Garcia, Ed.D., who has been the superintendent/president at College of the Desert since last August.

“The Imperial Valley College Board of Trustees are extremely excited to announce the unanimous vote to appoint Dr. Lennor Johnson to the position of superintendent/president,” Said IVC Board President, Karla Sigmond “Dr. Johnson is a highly experienced visionary leader who possesses exceptional qualifications, is committed to our community and most importantly leads with heart and passion, ensuring student success for all through equity, inclusion, and access.”

Johnson was among the two finalists for the position who made public presentations on April 25 at the college during the Presidential Open Forum. The second candidate is Dr. Javier Ayala, Ph.D., Dean of Career and Technical Education and Workforce Development at Grossmont College.

Johnson, an Imperial resident, served as Imperial Valley College’s vice president for Student Services & Equity, and since August has been the interim Superintendent/President.

Johnson’s experience in higher education spans over twenty-four years, and he has dedicated his career to helping students achieve their educational goals and closing equity gaps.

“I am extremely excited and humbled by the opportunity to serve as IVC’s next superintendent/president,” Johnson said. “I would like to thank the Board of Trustees, students, employees, and the Imperial Valley community for their support. I hope we, as a community, can continue to eliminate barriers for our students, offer academic programs to ensure student success, and strengthen community partnerships.”

Since he arrived at Imperial Valley College as interim Dean of Student Services in 2016, he has played an integral role in the growth and development of the prison program, dual enrollment, food pantry, student housing, and other programs designed to address the unique needs of students who are considered foster youth, disabled, formerly incarcerated, homeless and other disproportionately impacted populations. Johnson has also successfully secured millions of dollars in grant funding to expand services for IVC students, including $8.8 million in expanding its student housing program in collaboration with San Diego State University – Imperial Valley.

He is active in the community. Johnson currently serves as a member of the Imperial Rotary Club and is a participant in the Imperial Valley Social Justice Committee, where he advocates for education reform and economic development, particularly for minoritized communities.

He also served four honorable years in the United States Marine Corps. Dr. Johnson has two children and resides in the City of Imperial.