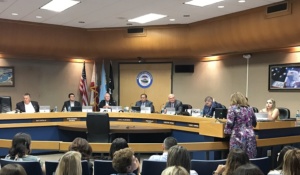 The Imperial County Board of Supervisors held two weeks of budget workshops to open a dialog with county staff and the community on how to improve its financial situation.

The board held a budget workshop at their regular meeting held Aug. 20 and Aug. 27 where various departments gave a presentation and ideas to put the county back on track financially.

“There were good comments made by the department heads, both positive and negative that will help us understand and improve the operations of the county,” Supervisor District 1 Jesus Eduardo Escobar said, “Our financial problems didn’t start last year and it won’t be solved anytime soon but we need to be active with them to find solutions and put our finances back on track.”

According to budget end-of-year report, countywide revenue ended at 96.8 percent of the budget which reflects a 6.7 percent over the previous year. Revenue was at $7.5 million more than the projected amount and $12.6 million the previous year.

Since 2016, the county has been using one-time reserves to balance the budget and cover the deficit balance. Resolving these shortfalls and balancing the budget without one-time revenue sources would require a 7% cost reduction for General Fund departments.

The three-year deficit mitigation plan calls for temporary use of carry-forward fund balance and other reserves. Additionally, departments will face a cut in their operating expenditures to bridge gaps. The main plan is to have a stable budget environment with no reliance on one-time resources after the end of the three-year term.

Another topic discussed was travel authorization and reimbursement policy by the county. The overall reduction in travel expenses has been $134,013.

Supervisor Escobar noted that there is a lot of paperwork that has to be signed to request travel that takes away time from staff and the CEO’s office. He suggested that if the department heads have the budget they should approve the travel.

The board also discussed the hiring process and how to better select extra-staff and volunteers for their departments. The open communication between the departments and the supervisors provided good ideas on how to better their services and operation of residents.

“We had a good conversation about best hiring practices and do employee surveys so we can get feedback. All this will play a role in where we plan to be in the next couple of years,” Board Chairman Ryan Kelley said.