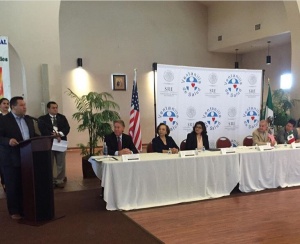 The Consulate of Mexico in Calexico inaugurated the Binational Health Week initiating prevention activities in Mexicali and Imperial Valley.

A bi-national epidemiological surveillance agreement was also signed at the ceremony between the Imperial County Health Department, the Secretary of Health of the State of Baja California, and the Faculty of Medicine of the Autonomous University of Baja California. This agreement will help these agencies share information.

The Binational Health Week is the largest community mobilization in the continent that aims to improve the health and well-being of the migrant population of Latin American origin living in the United States and Canada. During Health Week, several federal, state and local government institutions, community organizations and thousands of volunteers meet annually in October to conduct a series of health promotion and education activities, including workshops, health and health insurance programs, vaccinations and free basic screening tests, among others.