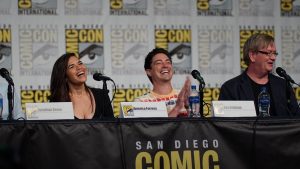 Mayor Todd Gloria will kick off this year’s Comic-Con International at the San Diego Convention Center. This is the first time the convention has taken place in-person since 2019 due to the COVID-19 pandemic.

Beginning with a few hundred fans in 1970, Comic-Con has become a celebrated San Diego fixture, attracting tens of thousands of spectators and bringing global attention to the region. In 2019 alone, Comic-Con welcomed more than 135,000 attendees and generated $3.2 million in hotel and sales tax revenue for the city.

The SAN DIEGO COMIC CONVENTION (Comic-Con International) is a California Nonprofit Public Benefit Corporation organized for charitable purposes and dedicated to creating the general public’s awareness of and appreciation for comics and related popular art forms, including participation in and support of public presentations, conventions, exhibits, museums and other public outreach activities which celebrate the historic and ongoing contribution of comics to art and culture.

From the beginning, the founders of the show set out to include not only the comic books they loved but also other aspects of the popular arts that they enjoyed and felt deserved wider recognition, including films and science fiction/fantasy literature. After one more name change (San Diego’s West Coast Comic Convention, in 1972), the show officially became the San Diego Comic-Con (SDCC) in 1973 as the fourth annual event. In 1995, the non–profit event changed its name to Comic-Con International: San Diego (CCI).

The show’s main home in the 1970s was the fondly remembered El Cortez Hotel in downtown San Diego. In 1979, Comic-Con moved to the Convention and Performing Arts Center (CPAC) and stayed there until 1991, when the new San Diego Convention Center opened. Comic-Con has been at home in that facility for over two decades.

With attendance topping 130,000 in recent years—in a convention center facility that has maxed out in space—the event has grown to include satellite locations, including local hotels and outdoor parks. Programming events, games, anime, the Comic-Con International Independent Film Festival, and the Eisner Awards all take place outside of the Convention Center, creating a campus-type feel for the convention in downtown San Diego.

Comic-Con has presented thousands of special guests at its conventions over the years, bringing comics creators, science fiction and fantasy authors, film and television directors, producers, and writers, and creators from all aspects of the popular arts together with their fans for a fun and often candid discussion of various art forms.

The event has seen an amazing array of comics and book publishers in its Exhibit Hall over the years. Over its four–and-a-half decade-plus history, Comic-Con International has continually presented comic books and comic art to a growing audience. That love of the comics medium continues to be its guiding factor as the event moves toward its second half-century as the premier comic book and popular arts style convention in the world.