CETis No. 75 celebrated its 40th Anniversary 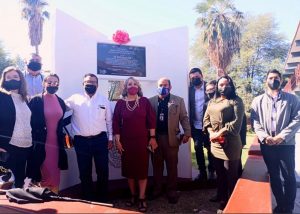 MEXICALI, B.C.- A celebratory event was held for the XL Anniversary of the CETis Study Center No. 75 Leona Vicario, which is directed by Professor Maria Teresa Banda Bañuelos. In a ceremony that took place on the quad of the campus, various recognitions were given to distinguished elements of the institution, as well as to outstanding students that have different specialties. Folkloric dance groups were present, in addition to the unveiling of the anniversary commemorative plaque, they also had the inauguration of the science club and other commemorative work.

“Today is a great day of celebration for all of us who work here, which since 1981, when its academic work began, each of those who have worked in this institution over the years have left an imprint for the contributions that each one was built at the time. I congratulate all of them, and especially those who continue to work in this institution today,” Banda said in her speech.

In an interview, the director of the campus added they have worked on different projects within the campus, she explained, in their administration, they have carried out the paving of the surrounding streets, implementation of blacksmith fences, preparation of professional soccer field, emergency stairs, a multipurpose field, as well as the construction of computer laboratories, among others that have given continuity to projects both from her administration and past ones.

“I feel very happy and more for the recognition than anything of the staff who are grateful for the attention they are having, as the work begins again on the campus, the fact that in just two months another vision of the institution has been achieved,” Banda explained.

Within the framework of this celebration, a panel of virtual conferences was held, from October 25 to 29, on transparency, corruption, cryptocurrencies, Mexico-US relationship, entrepreneurship, and Covid-19.