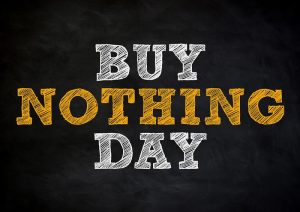 While many got up very early to buy at the stores and take advantage of the discounts, people are also encouraged to stay home and buy nothing on this day.

#BuyNothingDay is a day that was made to protest consumerism but also to encourage people to save money and adopt a lifestyle that helps them save money. It teaches people not to buy things they don’t need. Instead of going to a big store, a person can buy at a yard sale or go to the thrift store to buy clothes.

In times like these people need to stop spending money on what they don’t need and save it for more important things such as paying bills.

“How you celebrate is entirely up to you, but I do urge you to get involved. If you stop for a moment to think about the message behind Buy Nothing Day, I think you’ll see that it’s far more than a day protesting consumerism; it can be the start of a new lifestyle,” the Buy Nothing Day website read.

Buy Nothing Day is an international day of protest against consumerism. In North America, the United Kingdom, Finland, and Sweden, Buy Nothing Day is held the day after U.S. Thanksgiving, concurrent to Black Friday; elsewhere, it is held the following day, which is the last Saturday in November. Buy Nothing Day was founded in Vancouver by artist Ted Dave and subsequently promoted by Adbusters, based in Canada.

The first Buy Nothing Day was organized in Canada in September 1992 “as a day for society to examine the issue of overconsumption.” In 1997, it was moved to the Friday after American Thanksgiving, also called “Black Friday”, which is one of the ten busiest shopping days in the United States. In 2000, some advertisements by Adbusters promoting Buy Nothing Day were denied advertising time by almost all major television networks except for CNN.