Calexico Will Have a New Fire Station 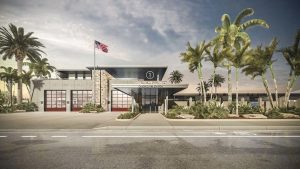 A demolition team ran through the Calexico Fire Station during the morning of Oct. 27 signifying the end of an era and the start of a major renovation that will add better services to the city.

The Fire Station located on 5th Street in Calexico is no more but it will be replaced by a new facility that will improve services and accommodate the firefighters and paramedics to better serve those in need. Very soon, Calexico residents will proudly say they have one of the best fire stations in Imperial Valley.

The Calexico Fire Department had outgrown their existing Fire Headquarters and Station No. 1 facility, which did not meet the operational space requirements for staffing and essential equipment needs nor the requirements of the California Essential Services Act.

Calexico Fire Chief Diego Favila gave a presentation to the Calexico City Council regarding the project and where it stands right now. The council also approved a change order in the amount of $77,308 from Oakview Constructions, Inc. to include additional construction materials, labor, and associated costs for the new Fire Station project.

“I’m very happy for the community but especially for the Fire Department and the firefighters because they have endured for a very long time and will finally have the appropriate settings they need,” Councilman Bill Hodge said.

Chief Favila agreed saying that when the firefighters saw the building demolished they knew the project they had been promised for many years would now become a reality.

The design rehabilitates the existing county courthouse for the administration offices. The high-efficiency systems and solar panels will help achieve zero net energy status for this project. Ultimately, this will be a durable and low-maintenance facility that will house the fire department comfortably for the next 50 years.