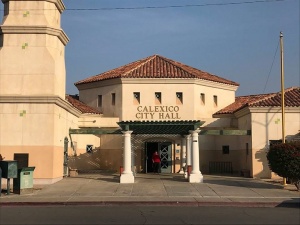 And then they were four.

The vacancy left by David Romero in the Calexico City Council will be filled immediately as people interested in being part of the city can apply now.

The Calexico City Council met in a special meeting to discuss how will they appoint the replacement of David Romero who resigned on Monday. They are opening the application process and the deadline to apply is this Friday, June 12.

A committee will review the applications before selecting the new councilman. The committee is made up of Mayor Bill Hodge, Councilman Morris Reisen, Finance Director Karla Lobatos, City Manager David Dale, and Chief of Police Gonzalo Gerardo. For more information on how to apply please go to www.calexico.ca.gov.

The appointed councilman will serve until December 2020. The council has until August 7 to make a decision as to who will fill the vacancy.

Romero was elected to the Calexico City Council in 2018 along with Councilwoman Rosie Fernandez. Romero resigned to the council on June 8 by submitting his letter of resignation. Romero was charged for allegedly taking bribes in exchange for favors from the city.

An online petition on Change.Org also called for his resignation and gathered more than 500 signatures.

The previous council appointment took place two years ago when Jesus Escobar resigned to become a County Supervisor. Escobar was replaced by Morris Reisen who is up for re-election in November.