US and Canadian business groups have joined together to urge trade officials to include the three nations in the North American Free Trade Agreement (NAFTA).

“Trade is vital for the economy and the generation of jobs in the three countries. In a few hours the 3 countries can reach a principle of agreement in the framework of a new North American Free Trade Agreement (NAFTA), “said Dr. Alejandro Díaz Bautista, an economist and national researcher at Conacyt, as well as research professor of El Colegio de la Frontera Norte (El Colef).

Canadian officials are in Washington this week hoping to reach an agreement on Friday. 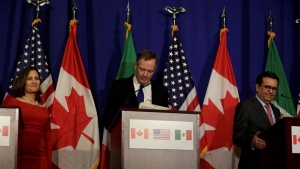 The National Association of Manufacturers (NAM) and Canadian Manufacturers and Exporters (CME) said that trade between the United States and Canada is vital to the employment and economies of both countries.

Canadian Chancellor Chrystia Freeland met several times on Thursday with the United States Trade Representative, Robert Lighthizer, and both worked to sign the key aspects of an updated agreement on NAFTA.

The Business Roundtable (BRT) and the Business Council of Canada (BCC) called on governments to take advantage of the many benefits of NAFTA with the commitment to preserve the trilateral structure of the agreement.

Losing this three-nation partnership would destabilize North American supply chains and endanger employment and undermine the region’s economic growth. The goal is to expand trade to promote greater economic prosperity that benefits all of our citizens.

A strong trilateral partnership between the United States, Canada, and Mexico is a cornerstone of that prosperity in North America. The three countries have been trying for a year to finalize NAFTA 2.0 after Trump considered the pact in force since 1994 a disaster.

The president of Mexico, Enrique Peña Nieto, and the elected president Andrés López Obrador, who negotiated with the United States as a common front, have insisted that NAFTA must remain trilateral, something that Prime Minister Trudeau also supports.