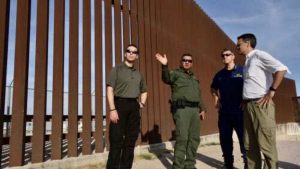 The Department of Homeland Security said that it ended a Trump-era policy requiring asylum-seekers to wait in Mexico for hearings in U.S. immigration court, hours after a judge lifted an order in effect since December that it be reinstated.

Administered by the Department of Homeland Security, it required migrants seeking asylum to remain in Mexico until their US immigration court date.

On November 9, 2018, then-U.S. president Donald Trump issued a proclamation suspending the right of asylum to any migrant crossing the US–Mexico border outside of a lawful port of entry. U.S. District Judge Jon S. Tigar of the Northern California District Court issued a November 19 injunction against implementing the policy, which was upheld by the US Supreme Court on December 21, 2018. In a separate case, Judge Randolph Moss of the DC District Court ruled in August 2019 to vacate the Interim Final Rule establishing the asylum ban for violating the Immigration and Nationality Act provides that a migrant may apply for asylum “whether or not at a designated port of arrival”, as previously argued by the Supreme Court.

On December 20, 2018, the Department of Homeland Security announced the Migrant Protection Protocols, colloquially known as the “Remain in Mexico” program, a policy allowing the government to release migrants with asylum claims to Mexico to await their asylum hearings in the United States. It implemented the program with a policy memo released on January 25, 2019.

The program was first rolled out at the San Ysidro, CA port of entry bordering Tijuana, Baja California. It was subsequently implemented in Calexico-Mexicali, El Paso-Ciudad Juarez, Brownsville-Matamoros, Laredo-Nuevo Laredo, Eagle Pass-Piedras Negras, and Nogales-Nogales. According to DHS, “Aliens whose claims are found meritorious by an immigration judge will be allowed to remain in the U.S. Those determined to be without valid claims will be removed from the U.S. to their country of nationality or citizenship.” By June 2019, over 12,000 migrants had been returned to Mexico under the policy. By September 2019, 47,000 people had been returned; and 57,000 by December 2019. Human Rights First found that at least 636 of those returned suffered violent crimes in Mexico, including kidnapping, rape, torture, and assault. As of September 2019, fewer than ten thousand migrants in the program had their cases reviewed: 11 had been granted asylum; 5,085 cases were denied; and 4,471 cases were dismissed without being evaluated, often on procedural grounds. The asylum admission rate for the program, 0.1%, is dramatically lower than the 20% among other arriving immigrants.

On March 4, 2020, the United States Court of Appeals for the Ninth Circuit ordered the “Remain in Mexico” program halted in the states under its jurisdiction, on the presumption that it violates statutory law; a lawsuit by various advocacy groups against the Department of Homeland Security is still awaiting a final decision. On March 11, 2020, the US Supreme Court said that the Trump administration could continue the program while litigation continues.

In February 2021, the administration of President Joe Biden ended the “Remain in Mexico” policy, resuming admission of new asylum seekers and the approximately 25,000 with pending cases to the United States, and asking the Supreme Court to dismiss the appeal as moot.

On August 14, 2021, a federal judge in Texas ordered a resumption of the Trump-era border policy that required migrants to remain in Mexico until their US immigration court date. The court ruled the reversal may have violated the Administrative Procedure Act which prevents arbitrary regulations because it did not consider various facts. A stay to block the re-enforcement of the “Remain in Mexico” policy was denied by both the Fifth Circuit Court of Appeals and the U.S. Supreme Court.

As a result of the Supreme Court ruling, the U.S. government is now required to re-enforce the policy. In December, the administration announced they had agreed to requirements by Mexico for the resumption of returns, including COVID-19 vaccination, completion of cases within 180 days, and inquiries into fears of a return to Mexico.