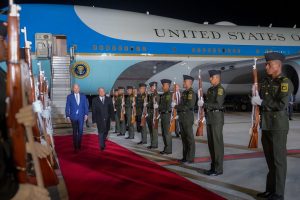 U.S. President Joe Biden arrived in Mexico to be part of a trilateral meeting with the President of Mexico Andres Manuel Lopez Obrador and the Prime Minister of Canada Justin Trudeau.

This year’s Summit takes place as the nations look to full recovery from the COVID pandemic and in an era of increasing focus on regionalization – a trend for which North America is well positioned.

But before traveling to Mexico, Biden visited the border for the first time in his presidency. According to Associated Press, the president observed as border officers in El Paso demonstrated how they search vehicles for drugs, money, and other contraband. Next, he traveled to a dusty street with abandoned buildings and walked along a metal border fence that separated the U.S. city from Ciudad Juarez.

“They need a lot of resources, and we’re going to get it for them,” Biden said before traveling to Mexico.

The North American Leaders’ Summit (NALS), sometimes called the Three Amigos Summit in the popular press, is the trilateral summit between the Prime Minister of Canada, the President of Mexico, and the President of the United States. The summits were initially held as part of the Security and Prosperity Partnership of North America (SPP), a continent-level dialogue between the three countries established in 2005, and continued after SPP became inactive in 2009.

The most recent North American Leaders’ Summit was hosted by US president Joe Biden on November 18, 2021, at the White House in Washington, D.C.

President Biden and Secretary Blinken will meet with President Andrés Manuel López Obrador of Mexico and Prime Minister Justin Trudeau of Canada to discuss deepening and expanding security cooperation and economic partnership as well as increasing coordination on global and regional issues.

In addition, Special Presidential Envoy for Climate John Kerry will travel to Mexico City where he will engage in trilateral conversations regarding climate and clean energy action and cooperation.