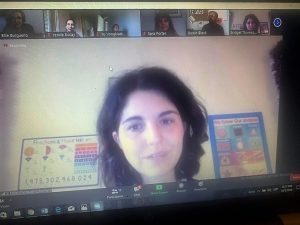 For most of the month of September, Beyond Borders Gazette participated in two journalism training programs in order to craft a better strategy to serve our audience during this election. Everything that was learned in the course will be applied by this publication in the coming weeks before the election.

Ellie Burgueno and Mario Conde graduated from these two courses that helped Beyond Borders Gazette create better strategies to create a citizens’ agenda that engages the voter in this election and have a strategy on how media can measure the success of their outreach to the community and get good results.

The month-long sessions also helped newsrooms create more voter-centric reporting that answers the public’s most pressing questions about who is on the ballot and the mechanics of voting. A citizen’s agenda that can help voters be more engaged in the election process.

In partnership with The American Press Institute, Election SOS is curating a representative and diverse network of elections experts for journalists to call on for sources and for support.

The other course taken by the Beyond Borders Gazette team was by Trusting News.

At Trusting News, they demystify trust in news and empower journalists to take responsibility for actively demonstrating credibility and earning trust. The group partners with newsrooms and researchers to experiment with transparency and trust-building strategies, and they use what is learned to train journalists and educators. They firmly believe that responsible, ethical journalists should not succumb to the national rhetoric around “the media” and instead need to invest in telling the story of their own work and why it’s valuable and trustworthy.

The program is possible thanks to the American Press Institute and  The Donald W. Reynolds Journalism Institute.