A Vision for Imperial County Unveiled at State of the County 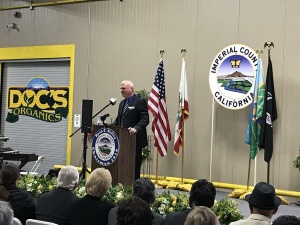 Ryan Kelley took the dais to set the direction the county must take in 2019 during the State of the County Address.

The event took place at Doc’s Organics in Westmoreland which is a locally owned family business from Imperial Valley. Kelley said the business is a testament to the fact that the small, local, and family businesses can not only grow but thrive in Imperial County.

Kelley said that there are still many challenges but they need to begin to change the story.

He mentioned how One World Beef opening stabilized the local $500 million dollars a year beef industry, the largest agricultural sector in Imperial County. Kelley said that education is improving thanks to the efforts of local school districts as well as Imperial Valley College and San Diego State University with their new undergraduate and graduate programs.

”We want our children and grandchildren to have a 4-year University in Imperial County. Bring students into Imperial County and let others learn about this valley and its people, rather than continuing to see our youth leave for greater opportunities elsewhere.”

Kelley said the board continues to stand with the Imperial Irrigation District in opposing any and all new water transfers.

” Imperial Valley and the Salton Sea have been sucked dry from predatory water agencies looking to build their economy with our water and at our expense. Those days must come to an end. The pioneers of this valley intended our water to be used here, rather than attempting to take our water to build a project, industry, or business on the coast, here’s a better idea: Come to Imperial County! We’re open for business here and you won’t have to battle to steal away our water if you put it to work here and create opportunity here,”

When it comes to the New River, Kelley said that it’s time to challenge the government of Mexico and the International Water Boundary Commission.

” We have tolerated this toxic pollution and raw sewage for too damn long. This is sick and inhumane for our families and our kids. We cannot tolerate this put of infection any longer,” Kelley said and added that state and federal agencies have already wasted millions of dollars on infrastructure in Mexicali and the equipment is already failing in an alarming rate.

“The money needs to be spent in Imperial County and serve its people. We can clean the river and provide a better environment for all of our Riverside communities and the Salton Sea,” he said.

Other Achievements by the County:

The Department of Public Works was instrumental in the formation of the Niland County Sanitation District and continued with road improvements such as Dogwood Road: 1 mile of roadway with an overall project cost of $1.5 million, and other Road Maintenance and Rehabilitation projects on various rural roads.

Workforce Development served an average of 2,000 individuals a month seeking employment while participating in or organizing various job fairs events for fisheries, service industry, retail, renewable energy, and government employers with other 3,000 attendees that resulted in approximately 800 job placements.