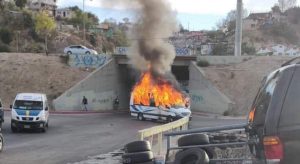 It was a violent day for Baja California as a group of armed individuals burned vehicles in different places at different points that forced the closure of gas stations, bars, universities, and grocery stores around the state on Aug. 12.

Public transportation was halted in Mexicali as a matter of precaution on a night of tension and fear where vehicles were reported to be burned. Tijuana Mayor Montserrat Caballero announced the deployment of the national guard to maintain order in the city.

“I have instructed the Secretary of Public Safety and Citizen Protection of Tijuana to maintain a permanent operation throughout the city to safeguard the integrity of citizens in the face of the events that occurred this Friday, where public and private transportation units have been burned,” the Tijuana Mayor said.

The U.S. Consulate General in Tijuana was aware of reports of multiple vehicle fires, roadblocks, and heavy police activity in Tijuana, Mexicali, Rosarito, Ensenada, and Tecate. U.S. government employees have been instructed to shelter in place until further notice.

“I encourage our binational residents to be cautious and follow the recommendations from government officials and avoid unnecessary travel to allow authorities to do their work and maintain safety. My thoughts are with those impacted by the incidents,” the San Diego County Board of Supervisors Vice Chair Nora Vargas said on Twitter.

“Given the events recorded this Friday, I want to express to you that my Government is acting to protect the population and attend to every one of the violent events that have occurred.

State and society are united, the same as all government orders and security corporations.

We have been working quickly since the first reports, both in the containment and investigation of these attacks.

I am meeting with the Security Coordination Table, to review the events and act decisively. This is how I will stay throughout the night.

I want to express to you that I will spare no strength or resources to take care of citizens’ security and supervise the actions that restore our peace.”

Night activities were canceled over the night of Friday, August 12th, streets looked empty, and many businesses around the region plan to close for the whole weekend until stronger measures by authorities are applied.