“We see a great strength for the bi-national region of Tijuana and San Diego. The Tijuana-San Diego mega-region represents a population of more than 6.5 million people and a GDP of more than 230 billion dollars by 2020,” said Dr. Alejandro Díaz-Bautista, an economist, as well as a research professor at the Northern Border College (El Colef).

In the Tijuana region, San Diego, Mexico, and the United States share important initiatives that favor academic exchange, innovation, and research, such as academic and research centers as the Colef, UABC, and CETYS in Tijuana, as well as UCSD, USD and SDSU in San Diego.

The Cali-Baja region is an example of how a binational region, formed by Southern California and Baja California, manages to integrate and compete globally as a region.

The so-called bi-national mega-region Tijuana-San Diego generates a commercial activity of more than 230,000 million dollars per year, hence it is sought to position it as the most productive border worldwide.

The research professor of the Colegio de la Frontera Norte (Colef), Alejandro Díaz Bautista, says that the commercial and cultural exchange between Southern California and Baja California (Cali-Baja) seeks to boost investment and employment, bringing together the competitive advantages and comparatives of each zone.

Mega economic regions are integrated beyond the political lines, where the factor of economic and social development is considered much more important.

With a total population of more than 6.5 million people, this area (Tijuana-San Diego) has the highest concentration of the population along the border of Mexico with the United States. In addition, this region tends to grow, highlights Díaz Bautista.

In the region alone it is estimated that about 100,000 people come from other latitudes annually. A factor that contributes to the fact that the area formed between Baja California and southern California is emerging as one of the most important, due to the fact that it has direct access to all North American markets.

It is strategically located to access commercial markets in the Pacific Rim and is a commercial and economic gateway to emerging markets in Latin America. 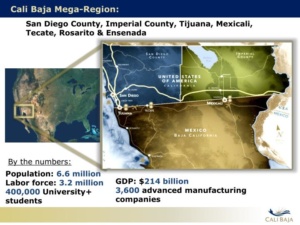 In addition, it is one of the main high-tech centers in the world, which has a large workforce and a world-class human capital, with several academic and applied research centers of great national and international prestige, where you have access to capitals and a very diverse economy.

The economic analysis indicates that the 40 most important mega-regions in the world concentrate approximately 66% of the economic activity, 86% of patented innovations, as well as 83% of the most cited researchers, professors, and scientists, with 19% of the world population.

It is relevant that the government and the private sector, as well as the academy, jointly promote actions to strengthen the mega economic region between southern California and the five municipalities of Baja California in 2020 and in the coming years.