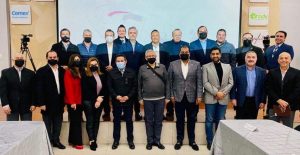 The Government of the State of Baja California initiated a common front for the opening, collaboration, and coordination with the productive sector, which will be able to more effectively address the challenges that the entity faces, said the president of the National Chamber of Electronics, Telecommunications and Technologies Industry. of the Information (CANIETI) Northwest, Román Caso Espinosa.

The foregoing is within the framework of the meeting held with members of the Cabinet of the Governor, Marina del Pilar Avila Olmeda, and the representatives of the organizations that make up the Tijuana Business Coordinating Council (CCE).

He highlighted the attendance at said meeting, of the General of Division, Gilberto Landeros Briseño, Secretary of Citizen Security of the State (SSCBC), accompanied by the Secretary-General of the Government Catalino Zavala Márquez, as well as the Secretary of Economy and Innovation, Kurt Honold Morales.

The President of Canieti Noroeste, as well as the BIT Center, highlighted that exercises such as the one carried out, with an open and permanent dialogue between the private initiative and the government, is an essential factor to advance in priority issues such as prevention, training in security matters. , the challenges related to the health sector, as well as the care and promotion of investment.

In this sense, he highlighted the attendance of the president of the Citizen Council of Public Safety of Baja California, Roberto Quijano, as a direct link to the government sector bodies on the matter.

Finally, Román Caso Espinosa pointed out the high expectations of this type of coordination, the close communication, and feedback from the areas of interest, which also represents an important change that contrasts with the way of carrying out the public policies of the previous state administration.