STATE GOVERNMENT WILL GIVE LEGAL SECURITY TO CHURCHES OF BAJA CALIFORNIA 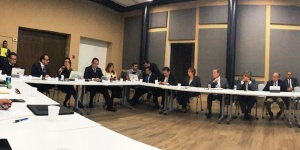 MEXICO CITY.- The State Administration headed by Governor Francisco Vega de Lamadrid, through the General Secretary of Government (SGG), works in coordination with Federal Government, in actions aimed at granting legal security and regularize the churches built in Baja California, on property owned by the nation.

The above mentioned by the Director of Religious Affairs, Ada Luz Vásquez Hernández, who on behalf of the Secretary General of Government, Francisco Rueda Gómez, met with the President of the Institute of Administration and Appraisals of National Assets (INDAABIN), Soraya Pérez Munguía.

“This important work meeting had the objective of establishing mechanisms that allow streamlining the regularization of churches built on properties owned by the nation and thereby provide legal security to the Religious Associations with respect to their heritage; in addition important commitments were established to bring training in the subject to the state of Baja California, “said the state official.