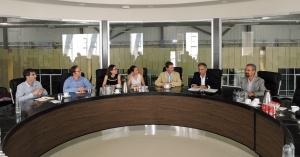 MEXICALI, BC.- With the visit to emblematic aerospace companies and educational institutions, the commercial mission for representatives of the European Union started Monday until Wednesday, September 12, in Mexicali. in conjunction with the State Administration headed by Governor Francisco Vega de Lamadrid, through the Secretary of Economic Development (SEDECO), to publicize the opportunities for commercial exchange, investment and economic strength of Baja California.

The holder of the SEDECO, Carlo Bonfante Olache, explained that 15 European Union officials participate in the Delegation, including the Head of the Commercial Sector of the European External Action Service, Paolo Caridi; and the Commercial Sector Advisor, Annabel Boissonnade, as well as officials from the Embassies of Portugal, Ireland, the Slovak Republic, the Czech Republic, Finland, Poland, Spain, the United Kingdom, the Netherlands, Sweden, France and Germany.

The state official indicated that in the first activity the company visited was GKN Composites of British capital, which manufactures structures of composite materials for the aerospace industry, such as those used by the Black Hawk helicopter Sikorsky.

Afterward, a tour was taken through the Center for Innovation and Design of Cetys University, where the delegation was received by the Dean of the Campus, Mario Dipp Núñez; and the Director of Liaison, José Luis Arroyo; also present were the President of the Industrial Commission of Mexicali, Mario Juárez López de Nava and the President of the Aerospace Alliance Cluster, Víctor Hidalgo.

For his part, the Undersecretary of Investment Promotion of SEDECO, Manuel Rubio Montoya, stressed that the State’s economy during the first quarter grew 3.5% per year, achieving the 1st place in the northern border and accumulating 32 quarters of growth. In addition, 157 million dollars (MDD) of investment were recorded in the second quarter of 2018 to accumulate 785 MDD in the semester.

Bonfante Olache added that the accumulated data positions Baja California in the 6th national place in the highest FDI acquisition, contributing 4.4% of the national total registered in this year.

Later, the Institute of Higher Technology Training of the State Government was also visited, which seeks to provide specialized training for strategic sectors in line with the demands of the industry, in order to generate the most competitive workforce in Mexico.

During the visit to Honeywell’s Research and Technology Center, we had the opportunity to visit the wind tunnel, a unique installation of its kind in Mexico, which supports Boeing’s 777X platform.

Finally, they visited the wind farm “Energía Sierra de Juárez” in La Rumorosa, since the agenda continues tomorrow in Tijuana, where they will meet with the State Governor.