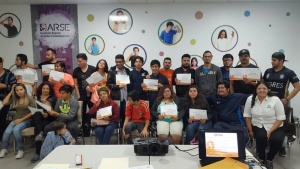 In order to raise awareness of gender violence and its serious consequences, the State Government headed by President Francisco Vega de Lamadrid, through the Women’s Institute of Baja California (INMUJER), carried out a series of activities within the framework of the “International Day of struggle against violence against women”.

This was reported by the Director of INMUJER, Rosa María Castillo Burgos, who added that work is currently being carried out in the five municipalities of Baja California in order the make the majority of people and civil associations know the enormous and damaging dimension of violence against women. Women and girls, and the urgency to participate to stop it.

Among the activities that were being offered, an awareness workshop on women’s human rights and prevention of gender violence, aimed at people with hearing disabilities, is included; the performance of theater work “Today I do not remain silent”, as well as community work for the prevention of violence against women through talks.

“With these actions we will achieve goals related to improving the treatment of citizens; who are trained with us from their area of ​​competence, and have the ability to detect violated people and support them to channel them to the appropriate facilities, so that they receive psychological and legal advice, “said the state official.

For this purpose, the Women’s Institute of Baja California has joined the orange campaign of the United Nations Organization “Unite to end violence against women”, and thereby generate awareness and inspire actions that put an end to this global scourge, making a call to wear some orange garment, object or symbol on the 25th of each month, concluded Rosa María Castillo Burgos.

-Editorial Thanks to the collaboration of the private initiative and local sponsorships, a Frontenis tournament …