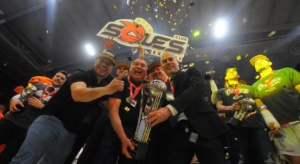 Mexicali ties the top as the greatest winner in the history of the LNBP with four championships by winning in seven games to Fuerza Regia de Monterrey.

Mexicali Soles conquered the championship of the National Basketball League 2019-20 season, having no contemplations before Fuerza Regia de Monterrey and imposing themselves by a score of 77-66 in a fully crowded PSF Auditorium.

It is the fourth title in the history of the franchise that celebrates its 15 years and ties the UV Falcons Xalapa as the two most winning teams in the LNBP.

Soles coach Iván Déniz becomes the most repeated winner with three championships, which Soles de Mexicali achieved in 2014-15, 2017-18 and 2019-20 seasons.

The league has had only two owners in the last four years, two of them for Soles who have played five of the last six finals played.

This season, with a renewed team with the arrivals of Daniel Amigo, Chris Reyes, Josh Parker, and William Daniels, among others, the Cachanilla quintet returned to the top to confirm itself as the most regular organization in the league.

Déniz sent Josh Parker home and very quickly the team showed the intensity that they could not show the night before. Mexicali played an impeccable defense in the first half of the quarter in which Fuerza Regia was forced to consume the shooting time twice.

Soles left little reaction time to Fuerza Regia who only once could have had an advantage in the encounter with a shot by Jerime Anderson (12-13), who completed the foul and counts. But it was all for the visitors.

Mexicali began to forge the road to the title in the second period with consecutive triples by Chris Reyes and Eric Garcia to take advantage of eleven points.

A streak of eight points with no response brought Fuerza Regia closer together, but Soles again stretched their advantage and they would no longer lose.

Five blocks from Soles until the first half were key for the team that had an improved version of Luke Martinez, who, a day ago, had just scored three points.

Martinez, who was named the Most Valuable Player in the regular season, was dispatched with 15 points and 7 rebounds to command the team offensively, supported by a punctual Josh Parker who was responsible for burying Fuerza Regia in the second half.

Jeleel Akindele, David Huertas and Jerime Anderson, despite leading Fuerza Regia in points, were unable to contain Soles and cut distances. On the contrary, the team gave the impression of falling into surrender when there were still a little more than two minutes left.

Triples of Aaron Valdes, Parker and Chris Reyes’s baskets, sentenced the game with an advantage of 18 points for a triumph without contemplations after what was experienced a night before.

In his 15 years in the league, Soles lifted the trophy to the top of Mexicali sky, the fourth in its history, the title of a historic Déniz and company. Soles was not only the best of the season, but it is also the best of the era.