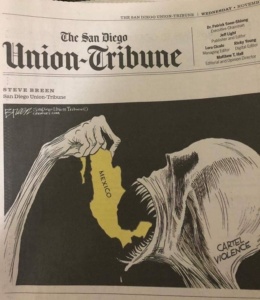 The growing violence in Mexico is creating concern among many. The San Diego Union-Tribune published a cartoon that has made headlines about how the cartel violence has taken over Mexico and the dangerous place the country is becoming.

The recent killing of the Lebaron family is one of the many tragic stories the violence in Mexico has taken. In the article written by Mark Stevenson by the Associated Press, he states, “Breaking the old rules against killing children, families or attacking foreigners no longer appears to be a priority — or even a concern — for criminals anymore, given the weak law enforcement in Mexico.”

Mexicans are still waiting for answers from the government about how they will solve violence in their country. Promises that crime and violence would be diminished with a good government and economic growth has not happened. The economy in Mexico has been stagnant in the first year of this new presidency and the new national guard barely got started and will take years before it can be determined if the new strategy was successful.

Recently, the capture and release of El Chapo Guzman’s son have caused many people to question if the Mexican government has any strategy to combat crime or they have succumbed to organize crime and lost the battle.