PEOPLE IN THE STATE CAPITAL OF BAJA CALIFONIA OUTRAGED DUE TO FEDERAL GOVERNMENT HANDLING OF THE NEW CALEXICO PORT OF ENTRY: NUÑEZ LOZANO 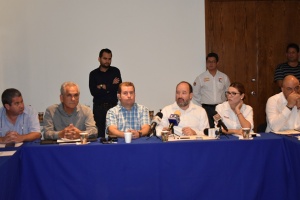 Mexicali, Baja California.- With a feeling of unity but with total indignation because of the insensitivity of the Federal Government headed by the still president Enrique Peña Nieto, yesterday a work meeting was held in an urgent manner in which the Front Garita Centro was formed, which demands that the authorities of the federation act with seriousness, attention, coordination, and comply with the 280 million pending to complete this work, said Baja California Assemblymember Jorge Eugenio Núñez, president of the Economic Development Committee of the Congress of the State.

At the meeting, the City Council Member Hector Ibarra Calvo said that at this time specific complementary actions are required to avoid affecting the city any more, and one of them is to change the logistics of the railway, and for that, he explained, a counterpart is needed in the United States, to affect the crossing of citizenship to the neighboring country as little as possible, as well as getting immediate funds for the minimum integration works for the overpass of the bridge that would be the key work to “avoid killing” the city downtown.

In that sense, the Supervisor of District I of the County of Imperial, John R. Renison, expressed his availability to coordinate the works referring to the railroad from the American side, with the purpose that in a short term it could have greater security and reduce the risk of both vehicular and pedestrian accidents, one of the great concerns that were put on the table.

For his part, Congressman Salvador Minor Mora, pledged in conjunction with the Congresswoman Marina del Pilar Olmedo, that this problem will be taken to the Congress of the Union to make an appeal to the President of the Republic to release the outstanding resources of the work to elaborate the two bridges, accompanied by the Morena bench; said warrant would be added to those already made this week both the City of Mexicali and the Congress of the State of Baja California in the same sense.

In that sense, the local legislator Nunez Lozano expressed his gratitude to Senator Alejandra Leon, who showed her full support and willingness to take the issue to the Chamber of Senators through a statement on the matter.

The Congresswoman Marina del Pilar also expressed her support to speak before the Tax Administration System (SAT) with the purpose of returning the resources that were withheld from the original Executive Project.

“The management before SAT is very important for the representation of the city, if it is possible for it to be convened at the head of business chambers, hotel associations, Municipal Government, State Government, so excuse me but I see them absent in the problem, and in that meeting before SAT it is possible to press an agreement to lower those 280 million pesos and return them, because they were already in the original budget; in addition, it is accompanied by a folder with risks for the population, safety for trains, economic losses that affect the quality of life of hoteliers, all this leads to the end of jobs, ” said Elvira Luna Pineda, president of the State Bar of Female Lawyers of Baja California (BEA).

The above, after the intervention of the Director of the Association of Hotels and Motels of Mexicali, Moisés Arguello, who said that this problem has led to a decline in hotel occupancy by up to 30%, in addition to the effects on the Medical Tourism District , said Dr. Enrique Ayón, President of the Association of Private Hospitals of Baja California, which is just one week has negatively impacted by 40%, and said that they need not only signs but greater security that will generate certainty for tourists doctor that can cross into Mexico without major setbacks.

At the meeting they agreed to evaluate the need to generate an immediate deployment in the national media with the signatures of the interested parties, so that this problem which affects the inhabitants of both northern Mexico and the southern United States, be taken as what it is, a serious binational problem that puts the economic stability of the capital of Baja California at risk.

Also present on this front were Jorge Gallego, Secretary of the Board of Directors of the National Chamber of the Transformation Industry (Canacintra); Alfredo Gómez, President of the Chamber of the Construction Industry (CMIC), Dr. Pablo Chee, Director of Almater Hospital; Dr. Ismael Frías, Medical Director of Hospital San Andrés, Raúl Vásquez, Vice President of the National Chamber of the Restaurant Industry (Canirac); Lino Medina, Grand Master of Grand Lodge; José A. Zárate and Jesús Granados, merchants of the Historic Center of Mexicali.

The Baja California Assemblymember Jorge Eugenio Núñez thanked all the attendees for their interest and participation and expressed all his support to help this front achieve a primary need of Mexicali, have a decent border port, and where the inhabitants can cross safely.