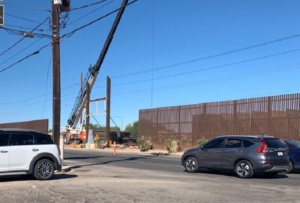 As border security is the primary responsibility of the Donald Trump administration, the new border barriers are being installed at a rapid matter.

Residents in Calexico have seen the construction of this new border barrier that will help Border Patrol agents be more alert about potential smugglers and illegal aliens entering the country.

“Outdated vehicle barriers near Calexico, CA were initially designed to deny smugglers the ability to drive through but remained vulnerable to foot traffic. New border wall system in this location is providing new capabilities to our agents, and better security for the nation,” states Border Patrol, Chief Carla Provost.

So far the new border wall system has 74 miles completed, 159 miles under construction, and 276 miles in pre-construction.

According to the White House, September saw 52,546 aliens apprehended or deemed inadmissible at the southern border, the lowest numbers for any month in the fiscal year 2019.

The border construction has resulted in a successful decrease of illegal in Calexico as the new barrier helped the border patrol according to former El Centro Sector Chief Gloria Chavez.

-Editorial It was an evening that combined women, wine, paint, and good music as the …