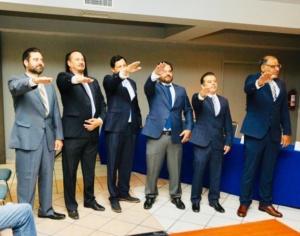 The Mexicali microbrewers association dressed up to appoint the new head of their board of directors. Pedro De Lara Garcia, the past president, passed on his responsibility to Oscar Galindo Singh, who will be in charge of the association, and who presented his new “Chicali Brewers” promotional campaign.

The president succeeded, De Lara García highlighted the support of the City Mayor, Gustavo Sánchez Vázquez, who has allowed advances in legal and economic matters, to allow the promotion of taste rooms and boutiques, as well as their integration, in order to position Mexicali as the place where the best craft beer in Mexico is manufactured.

Likewise, the Mayor of Mexicali said he was proud of the advances that this new industry has had, which represents a great economic spill, generating jobs, and promoting tourism for local consumption. Adding that the national recognition of Mexicali beers, is a historical heritage for the city, which has been revitalized, and as citizens, we all must take care of it and highlight its value which identifies us as Cachanillas.

For his part, Oscar Galindo Singh, after taking oath as the new president of the association, addressed some words of gratitude to the members of the previous board, where he took the opportunity to explain about the “Chicali Brewers” ​​campaign and the new challenges that face this recent economic engine, which seeks to establish itself as a guild that continues to benefit local producers.

He indicated that in September, in the coming national contest Mexico Beer 2019, they will present the Chicali Brewers brand, as a symbol of the integration of more 27 commercial partners in the local production breweries, in order to endorse the quality of the craft beer made in Mexicali.