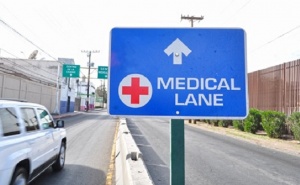 Mexicali, B.C.- As a result of negotiations between members of the 22nd City Council of Mexicali through COTUCO Mexicali, the Municipal Public Safety Director, CBP (Customs and Border Patrol) of the United States, and INDAABIN, the third general traffic lane was permanently rehabilitated which leads to the medical lane.

Omar Dipp Núñez, Director of Cotuco Mexicali reported that this measure is solving an issue of several years where patients entered the third lane to find it closed later with a metal barrier that favored Sentri lane, but not exempt from having to do some concessions in terms of hours of operation for the medical lane in Sentri lane peak times.

Dipp Núñez, informed that the Sentri lane barriers, already inside the Indaabin courtyard, will move to the right (north)  first, enabling a second Sentri lane inside the curve, and second, eliminating the parking space that was used illegally, and being permanently enabled with traffic in the third lane of general traffic, which will also eliminate the business for windshield cleaners that offered drivers to go into the third row for a tip and which caused great annoyance to all users.

This will improve the security of the international port, which has been and will continue to be reinforced by the Municipal Direction of Public Safety.

The official said that this will provide a better service to all users and at the same time will improve the image and security within the border patios. The new schedules will take effect from Sunday, June 17, 2018, same day in which it will stop opening on Sundays.

These measures and schedules will be only for the remaining months of 2018 and used in the current booth, leaving the medical lane ready to migrate to the new border port of entry by December which will have digital technology that will allow users to buy and print passes from their business without having to visit the Cotuco offices, as well as using a lane that will flow directly to the North American port.

The medical lane will open in the following schedules: