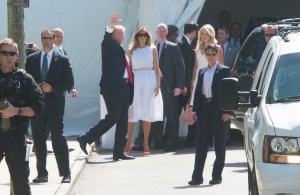 (Washington, DC) —Judicial Watch announced that it filed a Freedom of Information Act (FOIA) lawsuit against the U.S. Department of Homeland Security for Secret Service travel-expense records related to expenses incurred protecting President Trump and his family while they traveled between June and October 2017 (Judicial Watch v. U.S. Department of Homeland Security (No. 1:18-cv-00161)).

Judicial Watch filed suit after the Secret Service, a component of the Department of Homeland Security, failed to respond to nine separate FOIA requests for records regarding:

The Secret Service records document costs for meals, hotels, air/rail, car rentals and other incidentals incurred by the Service while providing protection of the president and his family when they are on personal or political travel.
On January 19, Judicial Watch released travel records from the U.S. Department of the Air Force in response to a FOIA request for President Donald Trump and his family.  The total costs for President Trump’s travels recorded in this document production amounted to $3,199,188.30.  Added to the previously released costs, the known political and leisure travel costs for President Trump and his family now amount to $13,533,937.28.

-Editorial Reading opens opportunities and expands the horizon of students and adults alike. That’s why …