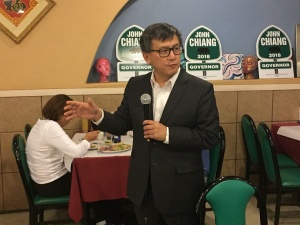 California gubernatorial candidate John Chiang visited the Imperial Valley to meet with residents and learn the needs of the region.

Chiang began his day early in the morning with a tour of the Salton Sea. Leading Chiang on the tour were public water sector including Juanita Salas, IID Director of Division I and Jessica Lovechio, Sea Mitigation Program Coordinator. The candidate had lunch with local labor union leaders, a visit to Imperial Valley College, solar fields, and a meeting at the LGBT resource center. His day ended with a community reception at Calexico’s Yum Yum Restaurant.

As a child of immigrant parents, John and his siblings grew up in a much different time. His parents arrived this country, each dreaming of a better future. While their determination and relentlessness led to a middle class neighborhood with better schools, they still experienced bigotry, as the first Asian American family on the block.