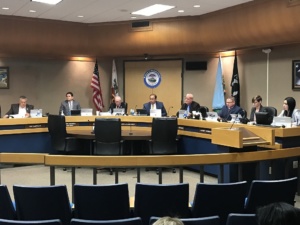 The Imperial County Board of Supervisors is asking California Governor Gavin Newsom to take a leadership role to address the transboundary water flow and pollution issues at the New River.

In a letter written by Board Chairman Ryan Kelley, Governor Newsom was invited by to tour the southern border and see firsthand the health risk that residents, specifically those who reside and work near the New River, encounter on a daily basis.

“We would like to show you the conditions that we live in due to the lack of action taken by the federal government to address the pollution, raw sewage, and other contaminants that are being discharged into the New River,” Kelley wrote.

The New River is a binational waterway that formed in 1905 after the Colorado River broke through a series of dikes and extensive flooding occurred in the Salton Sink. The river starts in Mexicali, and then flows north into the United States through Calexico, continuing the Imperial Valley before eventually draining into the Salton Sea. The river I severely polluted by discharges of waste from domestic, agricultural, and industrial sources in Mexico and Imperial County. While significant progress has been made on both sides of the border to improve the water quality over the last few decades, there continues to be raw sewage spillage into the New River and the heavily polluted waterway remains a threat to public health.

Kelley added that the polluted New River has threatened the public health of the people and also hindered economic development opportunities within the County, particularly in the area west of Calexico.

“This has no doubt contributed to the loss of businesses, declining real estate prices, and half of otherwise viable residential or commercial development in the area.

Additionally, New River pollution seriously threatens the ecosystem for wildfire and other biological resources throughout the region and contributes to the water quality problems of the Salton Sea,” Kelley added.

Between 1997 and 2007, several binational projects were completed to repair and replace much of the sewage treatment infrastructure in Mexicali. In spite of these binational efforts, in 2014, the California State Water Resources Control Board, through the Colorado River Basin Regional Water Quality Control Board, notified the federal government that Mexicali was experiencing increased sewage discharges into the New River. Such discharges were the result of aged and dilapidated sewage collectors and other infrastructure that has yet to be repaired or replaced.

Over the past five years, the County has been notified of numerous discharges of millions of gallons of untreated sewage into the New River. Since 2017, the board has taken several assertive actions to engage the federal government and to discuss, support and coordinate efforts to implement restoration projects that would improve the water quality of the New River.

Some of these actions include: supported proposed congressional legislation that would establish a federal program within the Environmental Protection Agency to coordinate restoration activities; adopted a resolution urging the federal government to take decisive action to eliminate bypasses or raw sewage from Mexicali into the New River, and sent certified copies of the resolution to federal and state regulatory agencies, including the International Boundary and Water Commission; and sent letters demanding immediate action to address ongoing deficiencies in the Mexicali sewage infrastructure that results in the contamination of the New River and surrounding areas of the county.

“The continuing discharges of raw sewage and other pollutants into the New River presents significant health hazards and is an ongoing concern of the community and residents of the county,” Kelley stated.

Kelley said he would like to explore options for state funding and priority consideration in available programs, similar to the recent action taken through the passage funding through state funding for Tijuana River Valley projects.