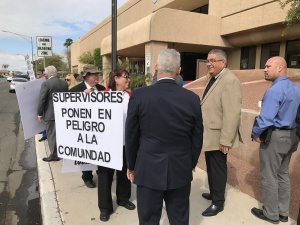 As a new working day began for many, members of the Imperial County District Attorney’s Association walked outside the County Administration Building holding their signs to initiate a strike asking for better working conditions to retain and recruit attorneys.

At exactly 8 a.m. on Tuesday, March 12, association members officially began their strike after months of negotiations between the county and the bargaining unit failed to reach a deal.

After coming out of closed session during the County Supervisors meeting, Board Chairman Ryan Kelley said the board directed Human Resources to immediately post job listings for Deputy District Attorney and Senior District Attorney offering a $5,000 signing bonus for any recruitments with a 2-year commitment and an additional $5,000 with a 3-year commitment to the County of Imperial.

Rodolfo Aguayo, Human Resources Director, gave a presentation to the board about the new proposal that will be presented to the association which will be a 6.6 percent salary increase. County would pay a five percent increase towards 2019 health insurance premiums and increase life insurance by $50,000.

The association members argue that the current working conditions and salary are making it hard for the county to retain experienced attorneys to handle important cases and are leaving for other high paying areas. The association has repeatedly told the board that the lack of attorneys is also putting an extra load of cases on the prosecutors.

”If the fiscal year would end January 31st, the county would have spent $51 million to make ends meet during the last two and a half years, ” Escobar said, ”We need to look at the overall picture and see how we are going to achieve financial solvency so we can continue serving the community.”