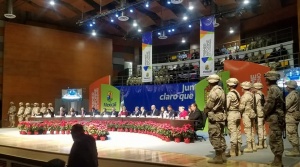 Before a crowd of attendees who gathered at the State Center for the Arts of the city of Mexicali, after having been included in a list of special guests to this private event, where access was restricted to those who didn’t have a physical invitation and where even, much of the media was not included, the mayor of Mexicali, Gustavo Sánchez Vásquez, rendered his State of the City Address and results that have been carried out during his first year in office.

Starting the event after having the well-known group of protesters “Mexicali Resiste” at the CEART’s parking lot entrance door, who behind the gate demanded to be given access, the ceremony started with the traditional Mexican national anthem and the allegiance to the Mexican flag. After that, opening the ceremony, members of the city council began their speech, and each was given five minutes to talk about their progress during the first year of work.

A video was presented to the audience which began with a comment and greeting by the national president of the FAPERMEX, journalist Colila Eguia, who was followed with the moving words of the Mayor of Mexicali who, during his speech, said: “This video is not just about the results of Gustavo Sánchez’ work… It’s the work, effort and dedication of 5 thousand 800 people who work at the town hall every day. To all of them I want to say “thank you”… Thanks to each and every one of the workers who make it possible for us to give good results today… We have been able to keep our word, demonstrating that although it is true we are all from different political forces, today the only force that has moved us is serving Mexicali. I feel very proud to head the best council that this city has had”, excited stated Gustavo Sanchez.

The mayor of Mexicali mentioned that at the beginning of his government, three days had not passed yet when he was already requesting a short loan for 250 million pesos which represented the budget deficit of the municipal finances, for which the implementation of an “austerity and cost containment plan” during the first year generated a saving of 40 million pesos in current expenditure compared to the previous year, it was through this method that they were able to pay the loan in advance and this resulted in savings of 7 million pesos in interests. So the budget deficit of 250 million pesos was reduced in the first year to more than 200 million pesos. It was by its completion, and after having covered the loan in advance that a “BB Stable” rating was obtained for the city through H & R and Fitch, which also resulted in reduction of interest from 9.3 seen in previous governments to 3.5.

The mayor spoke about the city’s progress in infrastructure, public services, public works, work carried out at the port of San Felipe and public safety, a subject that has not ceased to be a great challenge, so during the first year police was equipped with 140 patrols, motorcycles and a new cyclist unit and, before the end of the current year, approximately 250 radios and 700 bulletproof vests for communication and protection of police force will be provided, in addition to adding 350 new police elements by the end of the administration.

At the end of his speech the mayor thanked his team and family for the support provided and addressing his wife with a broken voice said that when both made the decision to run for office, as a family, they took the commitment to give Mexicali three years of their lives, from which the first one has passed already, and he was willing to do everything in his power and fight, because “he who does what he can does what he should”. He ended his message affirming that, together with the citizens, Mexicali will be a great city.

For its part, the business sector of Mexicali applauded the achievements, not before also pointing out that transparency is still the opportunity to achieve greater scope, since a year after the beginning of the current municipal administration, the question remains about knowing under which conditions municipal finances were found, since it was said that the new council had received very complicated finances, with irregular positions, unexercised or unchecked resources, with enough data to be observed in the accounts of the previous administration, and with many unproven contractors’ contracts, and more.

There was a record of 13 investigation files, the City Council’s Syndicate has expressed the atypical conditions of independent contracts, payroll and a detailed inspection that must be followed up, however, information it’s still not precise. A year has passed since the first investigations, the mayor appealed it was still necessary to wait until having the investigation cleared out and official integration of the evidence. Nevertheless, until today, it has been months since this administration took the municipality reins, and still reality of the situation has not yet been made known to the public, which leads us to believe that much less has been done about it.

“The good must be recognized, the areas of opportunity pointed out and the crimes must be punished,” stated the city’s businessmen.