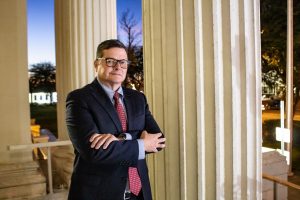 George Marquez is an attorney from Imperial Valley that has the respect of his peers and the community as a whole because of his character and humble personality that exudes confidence. With professional experience as a former prosecutor and now as a deputy public defender, Marquez has a unique perspective of the law. He is the youngest of nine children. His father was a mariachi and cabinetmaker while his mom was the pillar and raised nine children to be great people.  He is a valley native having been raised in Imperial Valley and attended public schools from elementary through Imperial Valley College.

George Marquez is the success story for this month’s Beyond Borders Gazette edition highlighting his community service and his work as an attorney, helping people and the most vulnerable.

“I’m currently married with two children, I have two daughters and a family that has made me realize several things. I no longer think only about now only, I think about their future, about my kids, the environment, the world they are growing up in” Marquez said.

After college he worked a few jobs before deciding he wanted to become an attorney. Marquez attended and graduated from Western State University College of Law and became a licensed attorney. He later worked in private practice before obtaining a position as a Deputy District Attorney in February of 2011.

“My inspiration to become an attorney is, essentially, for me, a tool to effectuate change. You can do a lot as an attorney and I have seen that firsthand as a former prosecutor and currently as a public defender” he said.

During his tenure as a Deputy District Attorney, he prosecuted many different types of cases, including serious and violent crimes, gang cases, and was also the juvenile prosecutor for approximately four years. As a prosecutor, he conducted jury trials, grand juries, preliminary hearings, and jurisdiction hearings, among others.

Since 2013 he has been an adjunct professor of criminal justice. He lectured at the University of Phoenix from 2013 to 2018.  In the Fall of 2018, he started lecturing at San Diego State University Imperial Valley Campus as a part-time criminal justice lecturer. Marquez has lectured a combination of approximately 32 classes. Many of his students have pursued successful careers in law enforcement.

“I think for me the experience of being a former prosecutor for nine years and public defender for the last two years has made me a balanced person. As a prosecutor, I learned the value of Law & Order because it establishes the guidelines for society. If we don’t have Law & Order, our society will collapse, holding criminals accountable is very important, especially those criminals who are dangerous and want to hurt people in this community.  We need to work closely with law enforcement in doing that.”

“As a public defender for the last two years, I opened my eyes to issues in my community and our society and I see it with a different perspective” and have new ideas as to how to reduce crime and keep our community safe.

Marquez decided to run for District Attorney because several members of the community approached him on running for office.  Marquez indicated he wants to improve the criminal justice system and put dangerous criminals behind bars.

“It’s very important that people abide by the rules.  If they don’t do that the societal structure will collapse.  I want to do it in a fair way, and I want to be a fair District Attorney because that will build public trust.  Law and Order are important to me but also fairness as well. In addition, I want to decrease recidivism. Recidivism is when people continually go back into committing crimes, going back to jail, etc. We need to attack the problem at the roots.  For those people that are drug addicts and are not dangerous, they need long-term treatment and I’m talking about treatment that goes a minimum of six months to a year.”

“There are a couple of Christian-based organizations that I would like to work with for those people that want to go there. A vocational component is very important because sometimes when people complete a program, they fall off the wagon, so to speak because there is no support system or they are not able to get a job. That needs to be established for drug abuse.  Marquez also indicated there need to be similar long terms local treatment options for those drug addicts who do not want to enter a Christian-based program.

For mental health, there are also people that need long-term treatment, six months to a year. We need to work closely with Behavioral Health and make sure they are getting treatment.  Residential treatment needs to be here in the valley instead of sending them out of the county.  Marquez indicated there needs to be a collaboration between agencies to make sure that people with mental health issues are receiving the appropriate treatment.  Marquez indicated that many police contacts are with people with mental health issues and that there need to be psychologists working closely with police to make sure these individuals are receiving the proper treatment. This, he believes, will reduce recidivism.

Marquez believes that the key to being a successful District Attorney is in balancing the principles of American criminal justice.  You can be tough on crime and also work with some defendants who don’t pose a risk.  Marquez indicated that he is in favor of using diversion programs for defendants who are not dangerous and/or have a minimal criminal record.  According to Marquez, diversion programs allow the dismissal of cases for defendants who follow conditions of an agreement with the prosecutor.  It gives them an incentive to succeed.  It’s a way of holding people accountable while having minimal impact on their future.  For example, someone with substance abuse problems may get their case dismissed if they attend a drug treatment program without dropping out.  For mental health defendants, it could be complying with any recommendations of a psychologist from Behavioral Health or attending a residential treatment for a specified period of time.

Another goal is to retain and hire more attorneys.  Marquez would like 22 attorneys not counting management. “That will allow us to be more aggressive in prosecuting cases and will reduce the workload of other attorneys.  The focus will be an attorney-centric approach focused on attorney moral.

Lastly, Marquez wants to implement policies for juveniles to better address delinquency. Marquez indicated that juvenile delinquency will be a multi-faceted approach.  The first component will be to advocate the courts for a WIC 241.1 dual jurisdiction.  This will allow juvenile delinquents who qualify to obtain services from dependency court where there are more tools to address juvenile issues, such as mental health.   Second, he believes a restorative justice model for juveniles who are not dangerous would be a creative way of resolving cases without the courts.  Restorative justice would bring the community, victim, and delinquent to the table in a conversation format.  Having an open line of communication between parties in a safe setting resonates more both for the juvenile and victim.

Lastly, he said a prosecutor must understand underlying societal issues that are connected to delinquency.  Social associations are a major indicator of criminal behavior.  Marquez plans on exposing them to different types of positive influences and planting positive seeds inside of them. “We can do that as part of the disposition of cases, whether as a probationary term or as part of a deal in a diversionary program.”  Often times a person who is leading a criminal lifestyle will reach a point where they want to change their life.  Having a previous positive seed planted in them could help them find their way to integrate successfully into society later on in life.

For Marquez, integrity and character are the most important things in a person.

What is success to you?

“Let me tell you what success isn’t.  First of all, success is not the size of your bank account. To me, success is being able to sleep at night because I am making an honest living…There are different types of success… Being a family man, success means the happiness of my family and watching my daughters grow into contributing members of society.  Having my daughters have strong internal qualities and by that, I mean being a person who can stand up for themselves but at the same time have empathy for other people. Success to me is also having integrity. When you say something people can rely on you. Character is more important than your reputation because character is who you are as a person whereas reputation is who people think you are. So to me having a good character is doing good things when nobody else is looking and nobody else knows what you are doing.”

“If you want to support my campaign and believe that I can bring positive change to the community contact my team and follow me on social media.”