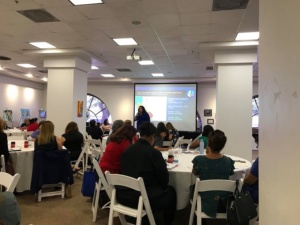 As elder abuse is a problem that affects the most vulnerable sector but the right information and tools available this can be prevented.

The Heffernan Memorial Healthcare District hosted the elder abuse conference at the Carmen Durazo Cultural Arts Center in Calexico where different community and law enforcement agencies gathered to learn about how to protect the elderly and learn about the red flags that can lead to elder abuse.

Elder abuse comes in various forms such as financial abuse that occurs when a person or entity takes, secretes, appropriates, obtains, or retains the real or personal property of an elder or dependent adult for wrongful use or intent to defraud. The most common perpetrators are family, friends, neighbors, acquaintances that have a history of past or current substance abuse, mental and physical problems, history of trouble with the police or are unemployed or have financial problems.

Red flags of possible financial abuse are a refusal to spend money on the care of the person, missing jewelry or other items, lack of a person grooming items, appropriate clothing when the person’s income appears to be adequate to cover expenses.  Also, abuse can be reflected when checks or other documents signed when a person can’t sign or there are changes to wills, house titles, bank account, power of attorney when a person is clearly incapable of understanding their actions.

The United States Census Bureau projected in 2000 that California’s elderly population will have doubled by 2025 to 6.4 million – a larger growth rate than any other state.

According to the National Center on Elder Abuse, there are as many as six million cases of abuse in the United States every year. The same study concludes that 11 percent of all the elder abuse cases in American occur in California. When it comes to elder abuse California leads the nation.