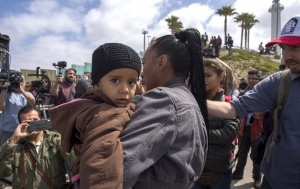 “It is a gross injustice that DOJ and DHS intend to deny humanitarian protection to people arriving at our borders through a systematic plan to separate families and prosecute all ‘suspected border-crossers.’ This is the latest push by the administration to undermine America’s asylum system. Families have been fleeing the violence and turmoil in Central America for years. Our nation’s leaders should identify ways to aid them instead of treating them like lawbreakers. The Administration intends to deter asylum seekers from coming to our borders by announcing it will criminally prosecute them. These practices are morally abhorrent and violate our nation’s laws and most cherished values.

“The Attorney General’s strident and misinformed claims that lawyers are ‘coaching’ asylum seekers reveal his disrespect of the fundamental principles of our judicial system which guarantee due process and the right to seek legal counsel. Having an attorney inform you of your rights before going in for an asylum interview isn’t fraud. It’s the only way a frightened asylum seeker can understand our complex legal system and have any fair chance of receiving protection-it’s also what our Constitution guarantees.”