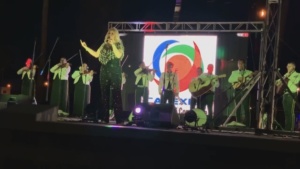 The traditional Mariachi Festival continues to unite the residents of Calexico every year to hear the best mariachi performances.

The weather was perfect on Saturday, May 18 in Calexico with 70 degrees and mild winds to enjoy the 28th annual festival that has become Calexico’s signature event.

The mariachi festival was first organized by valley resident Helen Lopez and was initially held at the Imperial Valley fairgrounds. Once the Imperial Valley Arts Council disbanded, the festival was in danger of being discontinued but found a new home in Calexico. The Calexico Chamber of Commerce and its executive director Hildy Carrillo decided to step in and took over the event in 2001.

As it is the tradition, a week-long celebration took place at the Carmen Durazo Cultural Arts Center where they had traditional craft artifacts from Mexico as well as folkloric dancing.

This year instead of having the tequila tasting, the party was moved to Crummet Park where they had the” Rock the Border” event with three local rock bands. The night was attended by the Mariachi Festival sponsors and by the general public paying a $25 per ticket to see the concert or had free shots of tequila.

It was the fusion of sounds and culture that brought people together in another mariachi festival. The Calexico Music Festival and Mariachi concert will come back in May 2020.