Breaking News
Home / POLITICS / BRIDGES FOR MEXICALI PORT OF ENTRY ARE IN FEDERAL AREA AND SHOULD BE PROMOTED BY THE FEDERATION: SIDUE

BRIDGES FOR MEXICALI PORT OF ENTRY ARE IN FEDERAL AREA AND SHOULD BE PROMOTED BY THE FEDERATION: SIDUE 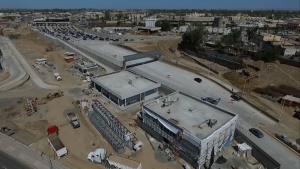 MEXICALI, BC- Tuesday, October 16, 2018.- The works corresponding to two bridges for the Mexicali-Río Nuevo border crossing, which are part of the integral plan, are projected within the federal zone and must be promoted and executed by the Federal government.

This was reported by Carlos López Rodríguez, Director of Territorial Planning of the Secretary of Infrastructure and Urban Development of the State (SIDUE), who explained that thanks to the intense efforts made by the State Administration headed by Governor Francisco Vega de Lamadrid,  partnered with the City of Mexicali and the business sector of the city, there has been good response from federal authorities during the recent visits to Mexico City, reason they are waiting for its prompt registration with the Secretary of Finance and Public Credit (SCHP).

“The Integral Project of the Mexicali Rio Nuevo – Border Crossing, has been managed by the State Administration since 2011; The Secretary of Communications and Transportation (SCT) registered the complete project in 2011 which included the bridges and had already a registration number with SHCP, for 800 million pesos (MDP). The project was already validated by authorities from both countries, unfortunately, due to budgetary constraints, they removed these bridges from the first stage of the project, which is why they have now been requested with an independent registration number, “the state official recalled.

He informed that it was in May 2017 when the State Government became aware of this reduction of goals, during the binational meeting between Mexico and the United States, for International Bridges and Crossings, held in Washington DC, where the Institute of Administration and Appraisals of National Assets (INDAABIN) presented the re-engineering of the executive project, where the cost of work was reduced and the bridges were not considered.

“We understand that it is until this year when it was transpired by the community since the project suffers from its infrastructure and efforts have been made by the business sector and various political actors, in support of the federal government allocating resources for the construction of bridges, but the State Government has addressed this issue working through political, diplomatic and technical means since the project cut was announced, “said López Rodríguez.

The Director of Territorial Planning of SIDUE informed that he is working in a technical roundtable with authorities of SHCP, SCT, Government of the State and Municipality of Mexicali, focused on the early registration of these projects, solving all the necessary aspects so that they obtain a new registry and can allocate the necessary federal resources, estimated at 280 million pesos.

“Last Thursday, we met again with federal authorities in Mexico City, we are practically doing it once a week and are very aware of the need for bridges. We believe we are on the right track, “concluded the state official.