MEXICO CITY.- Aware of the importance of the gastronomic sector in Baja California and the impact it has had on tourism attraction, the State Government led by President Francisco Vega de Lamadrid, from the Secretary of Tourism (SECTURE), the state participated in the national event “Mexico Foods 2018”, which took place from August 14 to 16 at the Citibanamex Center in Mexico City.

The Deputy Secretary of Tourism of the State, Ives Lelevier Ramos, stressed that Baja California has enjoyed momentum during the last years due to the gastronomic variety offered by the entity, which has been of great interest to more than 7 million visitors.

This is how he explained that Mexico Alimentaria is the most important meeting point in Mexico and Latin America so that producers, buyers, technology developers, investors and the general public can learn about the development opportunities offered by the Mexican countryside and seas. 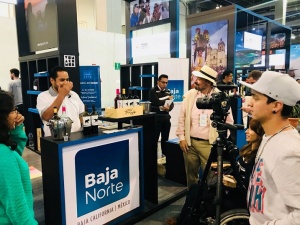 He explained that in this event SECTURE participated in collaboration with the Secretary of Agriculture, Livestock, Rural Development, Fisheries and Food (SAGARPA) and the Secretary of Fisheries and Aquaculture (SEPESCA) of Baja California, with a tourism booth in which they provided information to more than 2 thousand 500 attendees on the gastronomic offer and services of tour operators in Baja California.

In the same way, Lelevier Ramos explained that Baja California has currently gained an important national leader in the culinary sector, derived in large part from the important role played by the State in agricultural production, livestock, fisheries, and aquaculture.

And it is that products such as baby vegetables, berries (strawberry, raspberry, blackberry, and blueberry), meat, abalone, hedgehog, clam, and mussels, to name a few, are protagonists of many of the dishes that have captured the attention of 32 percent of those who visit the entity annually.

Derived from the above, the chefs “Bear” Fields of the restaurant ‘After Horizon’ and Bernardo Gonzalez of ‘Machine 65’ prepared dishes such as ceviche striped bass with 5 sauces and hedgehog ceviche, which were of great interest to attendees.

On the other hand, the state official recalled that one of the tourist products that has been of greater interest has been the Wine Country, which is responsible for producing more than 80 percent of Mexican wine.

That is why it was of great interest to the attendees, to have the opportunity to enjoy the samples offered by the wine houses such as El Cielo, Viña de Franes and Bodegas F. Rubio.

Likewise, Baja California has already more than 90 craft breweries, which have been recognized in international competitions and this time it was the Wendlandt brewery in Ensenada who was in charge of giving samples of the products that can be found in the State.

Finally, he said that as a result of this participation it is expected to join efforts to place Baja California as one of the best tourist destinations and that its producers, chefs, and farmers collaborate in increasing the visibility of the State in the panorama of high-quality products made in Mexico.